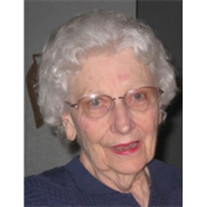 Virginia May Waggoner, 98, passed way at Homestead Health Services in New Holstein, Wis. on January 15, 2021 where she had been a resident for the past 5 years. She was the former Virginia May Clayton, born March 6, 1922 in Belmont, Wis., daughter of the late Frank and Hilda (Gratz) Clayton. She was a graduate of Belmont High School. She continued her education at Platteville Normal School, what is now UW-Platteville. She taught in the rural schools for several years. She enlisted in the Navy (WAVE) and served our country for almost two years. On July 13, 1947 she married Donovan Waggoner at First Lutheran Church, Freeport, Ill. She worked with her husband who was a co-owner of The Coast to Coast Store for many years. Virginia and her husband were married for 61 years before his passing on January 15, 2009. They were long time members of First Lutheran Church. She was known for her delicious potato salad that she took to family gatherings. She was a loving and devoted wife, mother and grandmother. Virginia is survived by a daughter, Penny (Bryce) Larson of Kiel, WI; a son, Mark Waggoner of Brooklyn Center, MN; two grandchildren, Christine Larson (Mike Rohde) of Plymouth, WI and Peter (Shalan) Larson of Newton, WI; three great-grandchildren, Sydney Rohde, Alexandra Rohde, Lillian Larson and numerous nieces and nephews. Preceding her in death were her parents and husband, her brother and sister-in-law, Melford and Gwen Clayton; sister and brother-in-law, Mildred and Loren Diehl; brother-in-law, Kenneth Waggoner; brother-in-law and sister-in-law, Bob and Katie Waggoner. There will be a visitation on Wednesday, January 20, 2021 at Burke-Tubbs Funeral Home, Freeport, IL from Noon-12:45 pm. The family asks that due to COVID all wear masks. A private family service will follow at 1:00 pm a Chapel Hill Memorial Gardens, Freeport, IL. Pastor Keith Johnson of First Lutheran Church will be serving the family. The family would like to thank the staff at the nursing home for all their kind and gentle care of our mother.

Virginia May Waggoner, 98, passed way at Homestead Health Services in New Holstein, Wis. on January 15, 2021 where she had been a resident for the past 5 years. She was the former Virginia May Clayton, born March 6, 1922 in Belmont, Wis.,... View Obituary & Service Information

The family of Virginia May Waggoner created this Life Tributes page to make it easy to share your memories.

Send flowers to the Waggoner family.