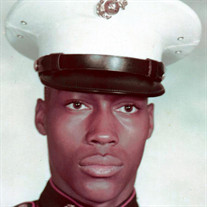 Walter James Hollins, 66, of Freeport, Illinois departed his earthly home, and moved to his new home, on Sunday, November 28, 2021 at Madison VA Hospital, surrounded by his family. Walter was born January 2, 1955 in Dermott, Arkansas, to the late Clara Whitley Hollins and Esley Whitley. After moving to Freeport, Illinois he was afforded the opportunities to discover his love for the outdoors and nature as a Boy Scout. Walter enjoyed spending time with his family and friends. Most of all he loved his sons and grandchildren. He was a true outdoorsman he enjoyed Gardening and sharing his crops with his neighbors and friends. He also enjoyed upholstery work for himself and others. In addition, He was also what you would say today he would have been called a turtle whisper all the turtles and frogs he would catch and sell or keep for himself. Another one of his interests was the Martial Arts. He graduated from Freeport Senior High School in 1972, after which he enlisted in the U.S. Marines Corps where he was a proud Marine and had no reservations of letting you know. He traveled around the world and experience many different cultures and found his love for fine clothing. One destination he loved was the Philippines where he often had outfits tailor made. After exiting the military, worked at Structo / King Seely Thermos and Micro Switch until his health began to deteriorate due to a rare blood disorder. Walter was a faithful member of St. James Christian Methodist Episcopal Church where he served on the Usher Board and was a member of the St. James Men’s Fellowship Choir and Mass Choir. Walter leaves to cherish his memory, six sons, Marshall Coy Hollins, of Freeport, IL., Antonio (Korina) Hollins, of San Diego, Ca., Vail Thomas, Demetrius James Hollins, Freeport, IL., Ian James Hollins, Freeport, IL., Jacan Clovis Hollins and Life partner Janet Wagner. Seven grandchildren, Malikah Hollins. Yasmeen Hollins, Camyelle Hollins, Jeremiah Hollins, Matteo Hollins, Sarah Thomas and Samantha Thomas. Six siblings, Shirley A. Hollins (Michael) Boggess of Freeport, Shu Tehu (Susan Whitley) Ra of Rockford, Matthew Whitley of Rockford, Marlee (James) Canada Willie L. Hollins of Rockford and Chester A. Hollins of Freeport and a host of nieces, nephews and cousins, friends and Aunt Parthenia Williams. Special mom Nannie Edison. Walter was preceded in death by his parents, Elsey Whitley and Clara Hollins and niece Kasia Whitley Funeral services will be 11:00 A.M. Saturday December 11, 2021 at St. James CME in Freeport. Visitation will be from 9:00 A.M. until the time of service. Entobment will be in Oakland Mausoleum in Freeport.

Walter James Hollins, 66, of Freeport, Illinois departed his earthly home, and moved to his new home, on Sunday, November 28, 2021 at Madison VA Hospital, surrounded by his family. Walter was born January 2, 1955 in Dermott, Arkansas, to the... View Obituary & Service Information

The family of Walter James Hollins created this Life Tributes page to make it easy to share your memories.

Send flowers to the Hollins family.