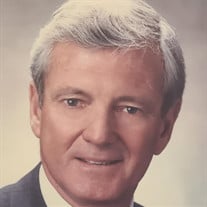 Allen E. Fehr, 87, of Freeport, loving husband, father, grandfather, and great-grandfather, died on Sunday, October 31 at Parkview. Allen was born on Aug. 28, 1934 in Freeport, and grew up on a farm near Afolkey. He graduated from Orangeville High School, served three years in the Army, and returned home to marry his high school sweetheart, Marlene Scheider, on Dec 18th 1955. Allen graduated from the University of Illinois as a Civil Engineer and started his career with the City of Freeport Water Department. In 1973, Joe Graham and Allen founded Fehr Graham and Associates with five employees. Today, the company employs more than 150 people in three states. A faithful member of Faith United Methodist Church since 1955, Allen was a frequent volunteer. He also served as a board member for numerous community organizations, including Kiwanis Club, YMCA, FHN, Northwest Illinois Bancorp, Boys & Girls Club of Freeport, Furst McNess, and other community initiatives. He felt it was important to be involved and never hesitated to share his time and expertise. Allen fulfilled his bucket list after retirement, when he and Marlene travelled extensively, living for a time in both Chicago and Provence, France. After their adventures all over the world, they finally settled in Naples, Florida, during the winter months and returned to their home in Freeport each summer. Family was Allen’s first priority, and he loved sharing time with them all at Lake Carroll. He and Marlene hosted numerous summers of “Camp GG” at the lake, making wonderful memories with their grandchildren. He was also a loyal friend, a good listener, and a committed mentor, and had a special knack for making everyone feel important. Allen’s big smile, infectious laugh, and helpful spirit will outlive his earthly presence. Allen is survived by his wife, Marlene; his sons, David (Lillian) and Neil (Christa Crehan); his daughter, Pamela (Ken) Loebel; grandchildren, Crystal (Preston) Pfeifer, Steven Fehr, Alexa and Michaela Loebel, and Isaac and Valla Fehr; and great-grandchildren Emmett and Owen Pfeifer. He is also survived by his sister, Jan (Dave) Miller, and numerous nieces and nephews. Allen is preceded in death by his parents, Homer and Lucile (Miller) Fehr. The visitation will be Friday, Nov. 5 from 4 to 7 p.m. at Faith United Methodist Church, 1440 S. Walnut Ave., in Freeport. The funeral will be Saturday, Nov. 6 at 11:00 a.m. at the same location. A memorial has been established for Faith United Methodist Church. The family would like to thank Parkview Home and FHN Hospice for their loving care.

Allen E. Fehr, 87, of Freeport, loving husband, father, grandfather, and great-grandfather, died on Sunday, October 31 at Parkview. Allen was born on Aug. 28, 1934 in Freeport, and grew up on a farm near Afolkey. He graduated from Orangeville... View Obituary & Service Information

The family of Allen E. Fehr created this Life Tributes page to make it easy to share your memories.

Send flowers to the Fehr family.