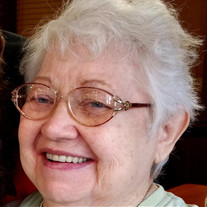 Carol Lee Baker, 84, of Freeport, IL, passed away peacefully in her home Thursday, March 31, 2022, surrounded by loved ones. She was born August 8, 1937 in Freeport to Robert and Eleanor Connery. Carol was united in marriage to Harrison “Pete” Baker on September 27, 1958 and were together 54 years until his passing in 2012. Carol was an accomplished and well-rounded woman. She graduated Freeport High School in 1956 and Sterling Beauty School in 1960. She ran Carol’s Beauty Shoppe out of her home for a decade and later managed Fannie May Candies in Freeport for some 35 years. Carol was an active member of the American Business Women’s Association (ABWA) for 27 years, and awarded Woman of the Year. She was active with Chicks of ’56, women’s bowling leagues, and she regularly played cards and games with her sister, Janice, in multiple card clubs and groups over the years. She loved traveling and vacationing with her family yearly to the lakes in Chetek, WI. Nothing made her happier than cooking for family, planning for family get-togethers, and spoiling grandkids and family dog, Lexxy, with cookies and treats. Carol is preceded in death by her parents Robert and Eleanor (Penticoff) Connery, husband Harrison “Pete” Baker, and brother-in-law Jack Hammond. She is survived by her sister Janice Hammond, Freeport IL, daughter Connie Meyer, New Glarus WI, son Robert Baker (Brea Adams and daughter Gabby Mullen), Freeport IL, grandchildren Samantha Meyer (Jason Jindra), Christopher Meyer, Aleisha (Bill) Gerbode, Kyle (Mandi) Baker, great-grandchildren, Nathan, Zoey, Arianna, Carson, Oliver, Calum, and Colby, and niece and nephews Sherry Koerner, Brian (Patti) Hammond, and Greg (Kim) Hammond. Funeral services will be 11:30 AM Saturday April 9, 2022 at Burke-Tubbs Funeral Home in Freeport, IL, with Rev. Eddie Eddy, Sr. officiating. Visitation will be from 9:30 AM until the time of service. Interment will be at Chapel Hill Memorial Gardens. A special Thank You! to FHN Hospice for their care and assistance throughout Carol’s final days before her passing.

Carol Lee Baker, 84, of Freeport, IL, passed away peacefully in her home Thursday, March 31, 2022, surrounded by loved ones. She was born August 8, 1937 in Freeport to Robert and Eleanor Connery. Carol was united in marriage to Harrison &#8220;Pete&#8221;... View Obituary & Service Information

The family of Carol Lee Baker created this Life Tributes page to make it easy to share your memories.

Send flowers to the Baker family.