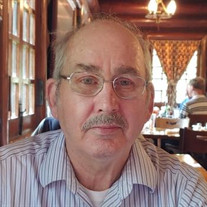 August 8th, 1940 - March 10th, 2022 Franklin Joseph Munda, known to friends and family as Frank, was born in Freeport, IL on August 8th, 1940, the third son to Nina (Harvey) and Frank R. Munda. His childhood was punctuated with moments of joy shared with his three fun-loving, industrious brothers. Frank began working at the age of fourteen with his grandfather laying bricks. He attended Aquin High School and in his later teens spun pizza and yarns at Barces (Barcelona’s) Pizza, a job and local hangout he thoroughly loved. Frank and his brothers loved to reminisce about those days. In 1962, Frank joined the U.S. Navy operating as a Boatswain’s Mate 3 aboard the USS Galveston. While serving in Vietnam he was transferred to the admiral’s barge serving the admiral as a member of the transport team. Frank was honorably discharged in August 1966. On November 26, 1966, Frank married the love of his life Chris (Crystal Brummer) at St. Mary’s Catholic Church in Freeport. Together Frank and Chris embarked on their 55-year adventure. Frank dabbled in construction for a time before joining the team at Lee’s Market as both a meat cutter and a baker. In 1971 Frank and Chris moved their growing family to Canton, Illinois to realize Frank’s dream of owning a bakery where he and Chris were able to engage in growing their business side by side. Unfortunately, a devastating fire at the bakery saw their dream literally and figuratively go up in smoke. Chris and Frank moved their family back to the Freeport area where Frank was employed by Kelly-Springfield Tire Company until his retirement in 2002. Frank was a devout Catholic and very active in his parish, St Joseph’s, Freeport where he was also a member of the Knights of Columbus. He was a founding member and past president of Stephenson County Right to Life. He started the Pro-Life Corner in 1989 and volunteered at the Madonna Renewal Center as often as possible. Frank rarely sat still and enjoyed donating his time to help those in need. Words do not begin to describe Frank and the impact he had on the lives of those he knew. Frank was loved by many, and especially cherished his familial relationships as a loving and devoted brother, father, grandfather, and husband to his wife of 55 years. He relished time spent with and took great pleasure in spoiling his grandchildren. He will be missed by his caring family and friends. Frank is survived by his loving wife Chris, their four children Andrea (Mark) Berning of San Marcos, CA, Jill (Eric) Berning of Easley, SC, Michael (Ieasha) Munda of Freeport IL, and Patrick Munda Greenville, SC. His grandchildren Maia and Ava Berning, Lucas, Christopher, Thomas, Dominic and Bryson Berning, Franklin, Daniel, Michael, and Joseph Munda, and one great-grandson Liam Berning. His brothers Roland (Shirlee) Munda of Freeport, IL, Tim (Carol) Munda of Arlington, TX, and Daniel (Mary) Munda of Freeport IL along with many loving nephews and niece. He was preceded in death by his parents. Visitation will be Wednesday at Burke Tubbs Funeral home 504 N. Walnut ave, Freeport 4:30-6:30 pm with Rosary prayer at St. Joseph Church 229 W. Washington Pl, Freeport Il at 7pm. A funeral Mass will be on Thursday March 17th at 11 am at St. Joseph Church, gravesite service to follow St. Joseph cemetery South St Freeport

August 8th, 1940 - March 10th, 2022 Franklin Joseph Munda, known to friends and family as Frank, was born in Freeport, IL on August 8th, 1940, the third son to Nina (Harvey) and Frank R. Munda. His childhood was punctuated with moments of... View Obituary & Service Information

The family of Franklin J. Munda created this Life Tributes page to make it easy to share your memories.

Send flowers to the Munda family.