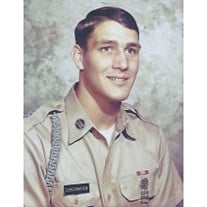 Jack Schoonhoven, age 71, of Freeport, went to be with the Lord on July 2, 2019. He was the husband of Kathy (Leech) Schoonhoven with whom he celebrated over 51 years of marriage. Jack is survived by his children, Stacy (Mark) Colberg, Chad (Tiffani) Schoonhoven and Nicole (Scott) Trickel. He is survived by sister Elaine (Don) Wise and brother Dick Schoonhoven. He was predeceased by his parents Laverne and Mayme (Fowler) Schoonhoven, sister, Edythe Cochran, and brother Harry Schoonhoven. Jack was born in 1947 in Freeport and graduated from Freeport High. He attended Western Illinois University for Architectural Drafting. Jack met Kathy at 1st Baptist church and married his beloved bride on May 7, 1968. He was drafted into the army and was a proud soldier who fought in Vietnam with his brothers in the 4th Infantry Division. He had a high sense of duty and obligation to ensure the freedoms each of us have today. He was a hero, and was honorably discharged, July 10th 1969. Jack was a loving, devoted father and remarkable grandfather. His children will remember him for his words of encouragement, wisdom and comfort. His grandchildren were the most important part of his life. He was present for every ball game, was at every bowling tournament, at every dance and every school play. He built so many memories with Shelby Colberg, Cole and McKenzie Trickel, and Ryan & Tyler Deemer. He was so very proud to be called Grandpa. Jack was kindhearted and was huge prankster. His quick wit never failed him and he would draw smiles from everyone around him. He enjoyed life and people. He took time to chat and made people genuinely feel cared for. He gave greater meaning to the word "friend". Long-time family friends Gary & Lynn Schleich, Gaylon & Pat Wilson and Bill & Deb Thomas held a special place in Jack's heart. Jack's funny, warm and generous nature will live with us forever. A memorial service is scheduled for 12:00 p.m. on July 13th at Park Hills Church. In lieu of flowers, the family asks that donations be made to Chapel Hill Cemetery for the Veteran's Ring of Honor on Jack Schoonhoven's behalf. Condolences may be sent to the family at 4169 Colberg Rd., Freeport IL 61032.

Jack Schoonhoven, age 71, of Freeport, went to be with the Lord on July 2, 2019. He was the husband of Kathy (Leech) Schoonhoven with whom he celebrated over 51 years of marriage. Jack is survived by his children, Stacy (Mark) Colberg, Chad... View Obituary & Service Information

The family of Jack C. Schoonhoven created this Life Tributes page to make it easy to share your memories.

Jack Schoonhoven, age 71, of Freeport, went to be with the Lord...