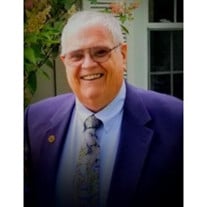 James "Bucky" S. Bangs, 71, of Freeport, Il, died at home November 13, 2020. He was born August 16, 1949 in Freeport, IL, the son of Raymond Churchill and Elizabeth Jane (Sharpless) Bangs. James married Bonnie Eckhoff in September of 1987 in Las Vegas. James graduated from Freeport High school 1967 was an honor thespian. He Attended College at University of Wisconsin-Stevens Point. His claim to fame was selling beer at the "Ice Bowl" in 1967. He was a lifelong Packer and Wisconsin Badger fan. In March 1986 he was the honorary guest conductor for the Wisconsin band. James owned and operated BHL Insurance company. He then became a Realtor in the Freeport and surrounding area achieving Emeritus status 10 years ago and in October of 2020 he achieved an amazing milestone receiving recognition and his 50-year realtor pin. Hobbies were golf, having achieved 4 holes in ones, and travel especially cruising. He loved spending time with his grandkids and family vacations. He was a member of numerous clubs and organizations including, Independent Insurance Agents of Illinois, Freeport-Galena Realtors Association, State and National Realtors Association, Aquin Open Committee, Germania Club, Elks Club, Eagles Club and The Freeport Country Club. Surviving James is his wife, Bonnie Bangs of Freeport, IL; daughter, Kristina Apodaca of Freeport IL; two sons, Tim (Tami) Vandenbark of Plainfield IL and Mark (Melissa) Vandenbark of Naperville IL; and grandchildren, Jeffrey and Jordan Apodaca. Kinsey and James Vandenbark, and Jack Vandenbark Sister-in-law and brother-in-law Pat and Fred Smith of Freeport; and 4 nieces. He was preceded in death by his parents; son, Jeffrey Vandenbark; and brother, Raymond C. Bangs. Memorial services will be held later. A memorial has been established in his memory. Please sign Bucky's guestbook and share a remembrance at www.burketubbs.com

The family of James S. Bangs created this Life Tributes page to make it easy to share your memories.

Send flowers to the Bangs family.