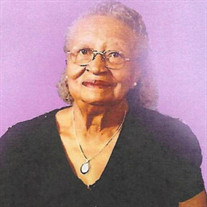 On December 19, 1930, Mary and Issac Elem of Fulton, TN birthed Mary Verbaline Elem. She was raised with 11 other siblings: five brothers and six sisters. She attended Fulton, TN. Elementary School and Ripley, TN. High School. Mary found love early in life and married William Morgan. Mary left Tennessee and relocated to Freeport, Il. She raised six children while working at Burgess Battery she had also had CNA training. Mary then decided to move to Breedsville, MI. There she enjoyed gardening and raising animals. She had chickens, rabbits, guineas, turkeys, and even a peacock. When she was done with her daily chores, she went to second favorite past time, BINGO! She had more daubers and good- luck charms then you could count. Not only did she play hard an often, but she was often a winner. She received a lot of joy in making quilts for every new addition to the family and everyone’s favorite pie at Christmas. Mary left us and began her heavenly journey December 8th, 2021. She leaves to celebrate her life three sisters: Norma Anderson of Hyattsville, MD., and Erma Dawson and Jeanette Elem both of Puyallup, WA.; two daughters, Carolyn Morgan of Springfield, IL. and Rhonda Pearson of Freeport; two sons, Lynn Morgan of Freeport and Rex (Jennifer) Morgan of Milwaukee, WI.; 16 grandchildren, 23 great-grandchildren; and nine great-great grandchildren. Mary leaves a legacy of love and strength. She was preceded in death by her parents, husband, two sons, Glynn and William A. Morgan; two granddaughters, Anita Wilson and Glynda Morgan; one great-grandson, Tyrie Allen; four brothers, three sisters, and one son-in-law, Cecil Pearson. Services for Mary will be held at 12:00 P.M. on Saturday December 18, 2021 at New Jerusalem Church of God In Christ Temple. Visitation will be held from 11:00 A.M. until the time of service Satuday at church.

The family of Mary E. Morgan created this Life Tributes page to make it easy to share your memories.

Send flowers to the Morgan family.