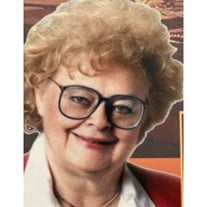 Olga Gize Carlile, 94, of Freeport, IL, passed away on Friday, February 19, 2021 of complications related to Covid-19. Born on January 9, 1927 in East Chicago, IN, she was the daughter of the late Walter and Emma (Euphemia Potapoff) Gize. As the oldest daughter of first-generation Russian immigrants, Olga graduated from the Ernie Pyle School of Journalism at Indiana University. At IU during a Friday the 13th party, she met the love of her life, Robert "Bob" Carlile. They were married in 1952. Olga started her 60-year career at The Freeport Journal Standard at a time when few married women were in the workforce, becoming one of the first women managing editors at the newspaper. A dedicated print journalist, photojournalist, food editor, book author and columnist, she broke ground for women journalists in finding ways to balance career, family, and community commitments. She wrote her "Around the Table" column every day for decades. Olga's award-winning stories focused on amplifying the lives of people in Freeport, Northern Illinois, and the world. She could find interesting stories anywhere and believed that everyone had amazing stories to tell. Olga was a five-time winner of the Illinois Woman's Press Association (IWPA) Writer of the Year award. She was honored as IWPA's Woman of Achievement in 1981. In 1992, the National Federation of Press Women (NFPW) awarded her Communicator of Achievement, which is an honor bestowed upon those members who have distinguished themselves within and beyond their profession. In 2007, she was named Illinois Journalist of the Year. Olga served as president of the IWPA from 1981 to 1983. She held many offices in IWPA and served eight years on the NFPW Education Fund board. She also served on a wide variety of community and charitable organizations in many capacities. Of noted distinction, both Olga and Bob independently received the Community Award from the Freeport Chamber of Commerce for their commitment to the community. Olga had many associations and friendships with such media greats as Julia Child, Martha Stewart, and Mike Royko. In 1976, she wrote the extremely popular "Heritage Cook Book." Olga and Bob loved to travel and visited over 75 countries during their 57-year marriage. Even when their sons Byron and Bradley were very young, they would travel the world as a family at a time when few Americans went abroad. Olga would write about each trip and inspire others to expand their horizons and to explore other cultures. Olga believed in always having a positive attitude, being humble, working hard, and living life to the fullest. She believed that every day is exciting and there is never a dull moment. "I consider myself one of the luckiest people," she said. "I've just been fortunate." Olga is survived by, and will be lovingly missed, by her son, Byron (Sandy) Carlile of Suquamish, Washington and two grandchildren, Stephen Carlile of Paris, France, and Khrystine Carlile of Eau Claire, Wisconsin; and son Brad (Andrea) Carlile of Portland, Oregon; and her brother, Walter (Carole) Gize, Jr., of Palo Alto, California. Olga was preceded in death by her brothers, Edward Gize, Dr. Raymond Gize, and sisters, Lydia Giffin, Mildred Romanowitz and her parents Walter (Emma) Gize. No services will be held at this time. Please sign Olga Gize Carlile's guestbook and share a memory at www.burketubbs.com . Memorials are being established in her memory at the Highland Community College Foundation and the Salvation Army. In lieu of flowers, please plant a tree in memory of Olga by visiting the Tribute Store at www.burketubbs.com

Olga Gize Carlile, 94, of Freeport, IL, passed away on Friday, February 19, 2021 of complications related to Covid-19. Born on January 9, 1927 in East Chicago, IN, she was the daughter of the late Walter and Emma (Euphemia Potapoff) Gize. As... View Obituary & Service Information

The family of Olga Gize Carlile created this Life Tributes page to make it easy to share your memories.

Send flowers to the Carlile family.