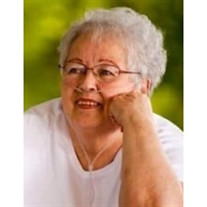 Patricia A. Smith died Friday, October 5 at Liberty Village Nursing Home. She was born December 8th, 1936 in Winona, Minnesota. The family moved to Hanover, Illinois during the depression to look for work. She grew up in Hanover and graduated from high school there in 1954. She moved to Freeport and was employed at Crum and Forster Insurance Company. It was in Freeport that she met the love of her life, Duane H. Smith, and was married on June 17, 1956. They were married for 62 years and had four children, Kathleen A. Zimmerman, Freeport, Rox Anne (Jim) Weik, Freeport, Susan M. (Rick) Lott, German Valley, and Michael D. (Kathleen) Smith, Freeport. They have 7 grandchildren, Tyler Weik, Ryley (Sarah) Lott, Allyson (Josh) Wilken, Matthew (Cassie) Weik, Aaron (Jordan) Smith, Adam Smith, Abigail Smith and 5 step grandchildren, Chip (Jenny) Zimmerman, Mark (Diane) Zimmerman, Julie (Scott) Blair, Cory (Bonnie) Zimmerman, and Jenny (Pete) Norman. They have 4 great grandchildren and 14 step great grandchildren. She had four siblings, Martin Murphy, Hanover, Pearl (Dick) Hamil, Hanover, Lynda Carson, Hanover, and Dennis (Ingrid) Wolbers, Lanark. They have several nieces and nephews. Pat was also employed at Elkay Manufacturing in Lanark for several years and then at Contel Telephone Company in Lanark that was sold to GTE whose office was then moved to Freeport. She worked there for 18 years. She retired in January, 1992. During retirement she started her own craft business and when her husband retired they operated the business together for 10 years. Pat also loved to bake pies, cookies, bread, and cinnamon rolls. She also liked to crochet, read books, paint ceramics and pictures, go antique shopping and attend family gatherings. She especially loved to watch her grandkids and family play sports and other activities in school until her health prevented her from attending. She was a member of the Lanark Methodist church and she transferred membership to First United Methodist Church in Freeport when she moved here in 2006. Preceding her in death are her grandparents, parents and step father, Lee Wolbers, son in law, Ronald Zimmerman and step grandson, Colby Smith. Visitation will be Monday, October 8th from 3:00 to 7:00 p.m. at Burke -Tubbs Funeral Home, Freeport. Funeral services will be held Tuesday, October 9th at 11:00 a.m., First United Methodist Church, Freeport with a luncheon to follow at the church immediately following the service. There will be a private family burial held at a later date at the Lanark Cemetery. In lieu of flowers a memorial has been established in Mrs. Smith's memory. Please visit www.burketubbs.com to sign Patricia's online guestbook and to share memories.

Patricia A. Smith died Friday, October 5 at Liberty Village Nursing Home. She was born December 8th, 1936 in Winona, Minnesota. The family moved to Hanover, Illinois during the depression to look for work. She grew up in Hanover and graduated... View Obituary & Service Information

The family of Patricia A. Smith created this Life Tributes page to make it easy to share your memories.