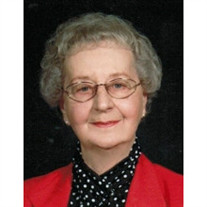 Peggy Ann (Miller) Schoonhoven, 93, was called home with her beloved Savior on February 28, 2019 at Manor Court. Peg was born August 26, 1925 in Janesville, Wisconsin, the daughter of Flossie E. (Zweifel) Miller and Russell L. Miller. She spent her early years with her Mother and step-father, Glen Bear, in Cedarville. Following her graduation from Freeport High School, she married Harold Schoonhoven on December 5, 1943 at the Cedarville Evangelical Congregational Church. Harold passed away September 14, 2006. They continued to live in Cedarville for several years and were blessed with two sons, Terry Lee and Dennis Harold. The family moved to Freeport in 1954 where they celebrated 62 plus years of marriage. Survivors include a granddaughter, Nisa Schoonhoven; grandson, Aaron (Morgan) Schoonhoven; great-granddaughter, Parker Louise; two daughters-in-law, Shelia Schoonhoven Korten and Christine Schoonhoven. Also surviving are many nieces and a nephew. Peg was preceded in death by husband, both of her sons, her parents, and step-parents, sister, Mary Lou (Bear) Wootan; two brothers, Robert and Russell Miller Jr. Memorial services celebrating Peg's life will be 10:30 a.m. Saturday March 23, 2019 at Zion Church. Pastor Gardy Cronk and Pastor Steve Rios will officiate. A luncheon will be held in the Zion Fellowship Hall immediately following the service. A memorial has been established in Peg's memory. Please sign her guestbook and share a memory at www.burketubbs.com

The family of Peggy Ann Schoonhoven created this Life Tributes page to make it easy to share your memories.

Peggy Ann (Miller) Schoonhoven, 93, was called home with her...