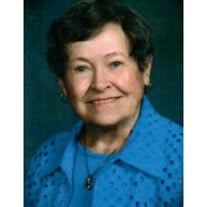 Ramona L. Klee Shimko died February 21, 2020. Ramona was born in Joliet, IL, August 27, 1928 to Alta and Francis Fessenden. After graduating from Joliet Township High School Class of 1946, she married Raymond A. Klee on May 29, 1948, in Lemont, IL. They lived in the Lisle-Naperville area until 1986. They moved to Freeport, IL, when he became President-CEO of Bankers Mutual Life Ins. Company. He retired in 1994, and they moved to Southern Woods, Homosassa, FL, in 1995 where they both enjoyed golf and meeting new friends. Ray passed away with a major heart attack on January 18, 1998. Her parents and a brother also predeceased her. Ramona remained in Florida until 2007 when she decided to move back to Freeport, IL, nearer family and friends. She went to Florida to visit friends to get away from the winter cold and met a long-time friend, John Shimko. They were married in September 2011 and made their home in Southern Woods. Ramona is survived by her husband John, her two sons Michael W. Klee (Phyllis) of Appleton, WI, and John R. Klee (Pam) of Port Aransas, TX. She is further survived by 4 grandchildren, Joanna L. Klee (Andrew Meurer), Greenville, SC, and Andrea C. Daly (Chris), Chanhassen, MN, Piper L. Waddle (Darrin) McKinney, TX, and Paul F. Klee (Jane) Denver, CO. 6 great-grandchildren, Kirsten R. Klee, Maddy and Abby Meurer, Greenville, SC and Matthew, Zachary and Ryan Daly, Chanhassen, MN. Ramona was an avid golfer for years, and enjoyed many hobbies. She lovingly made countless woven afghans that she gifted to friends and family, also donating to nursing and veteran homes. She made friends easily and diligently wrote notes to them to keep in touch over the years. She also enjoyed many friends along with nieces and nephews she acquired after marrying John. She was a long-time member of St. Thomas Aquinas Church in Freeport, IL, and of St. Thomas the Apostle Church in Homosassa, FL. Inurnment of her ashes will be in Oakland Cemetery Mausoleum, Freeport, IL. A funeral mass will be held on April 25, 2020, at St. Thomas Aquinas Church in Freeport, IL. Visitation will be at 9 am until time of service, 10:30 am at the church. In lieu of flowers, donations in Ramona's memory may be made to the Highland Community College Foundation, for the Raymond A. Klee Scholarship Fund. Donations may be sent c/o Burke-Tubbs Funeral Home, 504 N. Walnut Ave., Freeport, IL 61032.

The family of Ramona L. Klee Shimko created this Life Tributes page to make it easy to share your memories.