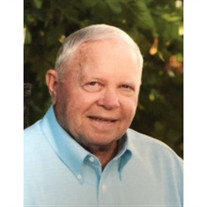 Richard Clarence Schone passed away peacefully September 17, 2020 at home with his family at his side. He was born. October 7, 1933 in Cedar Rapids, Iowa to Clarence and Hazel Schone. Richard married Beverly Carr October 22, 1960 at the Methodist Church at Cortland, Illinois. Next month they would have been married for 60 years and he would have been 87. A 1952 graduate of Elizabeth High School, Richard was a 4-year letter winner on the Terrapin basketball team. He led the 1950-51 team to a 24-3 record and the '51-'52 team finished 27-2. Noted for his quickness and playmaking ability, Richard was a team captain for 3 years and also one of the team's leading scorers. The 1950-51 squad won the Mt. Carroll Tournament, the U.S. Grant conference title and the district tournament before dropping a 5-point decision to West Rockford in the regional. In 2005 he was honored and inducted into the Northwestern Illinois Athletic Hall of Fame for his high school accomplishments. Richard played 2 years of college basketball at Cornell College in Mt. Vernon, Iowa, before volunteering for the military in 1954. He served with the Air Force which included time in Korea. While in the Air Force he played against the Olympic All-star team in a benefit game in Waco, Texas, and was contacted by 2 recruiters from Baylor University. After his military service Richard returned to Cornell and received his Bachelor of Arts degree in1960. Richard coached at Freeport Junior High for 18 years, and his teams had a combined record of 222 wins against only 47 losses. He was also a health and P.E. Teacher for 31 years at FJHS prior to his retirement. He was a member of Harmony (formerly Embury) Church, YMCA and the Eagles Club. Richard enjoyed sports and kept active with racquetball, bowling, softball, horseshoes and fishing. He was an avid Cub and Bear fan. He is survived by his wife, Beverly, five daughters, 14 grandchildren and two great grandchildren. Sherilyn Schone-Knoll, Loves Park-grandchildren Makenna, Madeline, Parker; Heidi Quigley, Freeport-granddaughter Alyson (Fiance' Anel Pasic); Gayle (Jamie) Winters, Freeport-grandchildren Adam Winters, Lauren Winters Tisdale- great grandchildren Emma and Eli Tisdale; Gina (David) Schachte, Madison, Wisconsin-grandchildren Sarah, Elizabeth, Matthew, Samuel, Davey, Nate; Nadine (Alex) Barghout, Louisville, Kentucky-grandchildren Alexandra, Helena, and grand dog Nina. Also surviving are sister-in-law Anna Appleby, a niece and several nephews. Preceded in death by his mother, father, step-father William Semrow, siblings Phyllis Niziolek, Glenn Appleby, nephew David Niziolek. Funeral services will be 1:00 p.m. Wednesday September 23, 2020 at Burke Tubbs Funeral Home. Pastor William Blomberg will officiate. Visitation will be 4:00 p.m. - 7:00 p.m. Tuesday September 22, 2020 also at Burke Tubbs. A memorial has been established in his memory for FHN Hospice and the YMCA. Please sign Mr. Schone's guestbook and share a remembrance at www.burketubbs.com

Richard Clarence Schone passed away peacefully September 17, 2020 at home with his family at his side. He was born. October 7, 1933 in Cedar Rapids, Iowa to Clarence and Hazel Schone. Richard married Beverly Carr October 22, 1960 at the Methodist... View Obituary & Service Information

The family of Richard C. Schone created this Life Tributes page to make it easy to share your memories.

Send flowers to the Schone family.