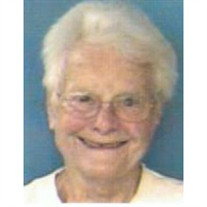 Rosanna "Rosy" Dietmeier, 90, of Freeport, died Wednesday June 6, 2018 at Manor Court of Liberty Village. She was born September 18, 1927 on the Wubbena Farm in rural Shannon, IL, the daughter of Herman and Sadie (Ruter) Wubbena. Rosanna married Robert Dietmeier August 3, 1952 in Freeport, IL; he died January 13, 1999. Rosanna was a member of Second Presbyterian Church where she was involved with various committees. She was also a member of the Rural Youth Club and the Sewing Club,. She was very family oriented and active with family activities: babysitting, sewing, camping, boating, and attending athletic and school functions of her children and grandchildren. She was introduced to boating by her husband and enjoyed going on family vacations to Lake Wisconsin. She enjoyed square dancing, playing the piano, singing, and canning. Rosie is survived by her two sons, Eric (Diane) Dietmeier and Shawn (Susan) Dietmeier both of Freeport, Il; daughter, Juliana (Jeffrey) McCrory of Spring Grove, IL; sister, Leona Frey of Rockford, IL; and seven grandchildren, Lane, Marta, Andele, Taylor, Leah, Shannen, and Connor. She was preceded in death by her parents; stepfather William Koning; husband, Robert Dietmeier; and stepsister, Lillian Gronewold. Funeral services will be 3:00 P.M. Saturday June 9, 2018 at Burke-Tubbs Funeral Home in Freeport with Sean Huguenin, Chaplain of FHN Hospice officiating. Visitation will be from 1:00 P.M. until the time of service. Burial will be in Chapel Hill Memorial Gardens. In lieu of flowers a memorial has been established in her memory. Please visit www.burketubbs.com to sign Rosanna's guestbook and to share memories.

The family of Rosanna "Rosy" Dietmeier created this Life Tributes page to make it easy to share your memories.

Send flowers to the Dietmeier family.