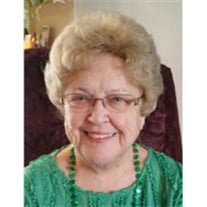 Shirley A. (Bowers) Homan, 80, of Dakota, died Tuesday April 17, 2018 in her home. Shirley was born August 24, 1937 in Freeport, the daughter of Merle and Virginia (Garrow) Crummer. She married John Bowers June 25, 1955 in Freeport. Mr. Bowers died November 27, 2002. She then married Jack Homan on October 22, 2005 in Dakota. Shirley worked on the family farm for over 40 years. Shirley also worked for Merle Norman Cosmetics. She was a member of Park Hills Evangelical Church. She enjoyed traveling in her free time but most of all spending time with her grandchildren. Surviving are her husband, Jack Homan of Dakota; son, Randy (Kim) Bowers of Brooklyn, WI.; daughters, Laurie (Randy) Widmer of Freeport and Sherri (Brian) Daley of Madison, WI.; step-son, Tim (Jill) Homan of Rockford; step-daughter, Sally (Kevin Lamm) Baker of Freeport; two grandchildren, Derek Widmer and Justin (Sage) Widmer; and two great-grandchildren, Brayden and Jonas Widmer. Shirley was preceded in death by her parents, first husband, John Bowers; granddaughter, Robyn Bowers; and step-great-granddaughter, Brynn Wells. The family would like to extend their appreciation and gratitude to FHN Hospice for the great care they showed Shirley, it was truly appreciated. Funeral services will be 2:00 p.m. Saturday April 21, 2018 at Burke Tubbs Funeral Home, Freeport. Visitation will be noon until the time of service at Burke Tubbs. A memorial has been established in her memory. Please sign Shirley's guestbook and share a remembrance at www.burketubbs.com

The family of Shirley A. (Bowers) Homan created this Life Tributes page to make it easy to share your memories.