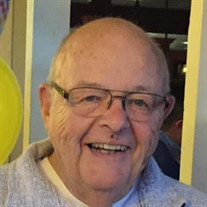 William Raymond Penticoff William Raymond Penticoff (Bill) died peacefully on Friday, September 17, 2021 at FHN Hospital in Freeport, IL after a 15-year battle with kidney disease. He was looking forward to entering heaven and meeting Jesus. Bill was born to Raymond J. and Hazel Ross Penticoff on March 13, 1935 in Terre Haute, IN. His mother died when he was an infant. He moved to Freeport when he was one year old, and was raised by his maternal grandmother, Vera Koboldt, who in Bill’s words, “Spoiled me rotten.” He lived in Freeport his entire life, and had a deep love for his hometown. He graduated from Freeport high school in 1953. He was very active as a multi-sport athlete in high school, and had a passion for everything Freeport Pretzels. He was a huge Chicago Bears fan and a die-hard Cubs fan! After high school graduation, Bill enlisted in The United States Air Force. He served his country during the Korean War for four years. On October 4, 1958, Bill married Joyce Ann Marsh in Rice Lake, WI. They raised their three children in Freeport. Bill worked for the Illinois Central Railroad for a few years before he began his career at Honeywell (Micro Switch) for 35 years. After his retirement, Bill worked in the pro shop at Park Hills Golf Course, his second home. In his younger years, Bill was a great bowler and won several local tournaments. He also loved golf and was an excellent golfer. For years, he golfed nearly every day, so working at Park Hills Golf Course, after retirement, was his dream job! The highlight of Bill’s golfing days was his hole-in-one on June 1, 1994. Bill accepted Jesus Christ as his Savior in 1973, and soon after, became an active member of The Evangelical Free Church, now known as Park Hills EFC. Bill served in a variety of roles at the church and sang in the choir. He loved being a youth group leader for many years while his children were in high school. Bill’s passion, interest, and knowledge for sports inspired him to be an official for football, basketball, and baseball. Bill and his football crew were like family (Tony Sciutto, Bob Niblo, and Joe Garrow). They were recognized by the IHSA for their excellent officiating, and were selected to officiate in numerous playoff games and several Illinois State championship games. Even after retiring from officiating, Bill sure loved to “help” the refs and umpires at his grandsons’ games! He also enjoyed his years as the announcer for the Pretzel basketball games. While his grandsons were playing baseball at FHS, Bill recognized the need for improving the entire FHS baseball field. He volunteered his time to develop the financing for this project, by personally contacting businesses. He appreciated the many generous donations from local businesses, which through billboard advertising financed the project at the baseball facility. Bill served on the Freeport School District board for 14 years. He also served as the school board president for several years. Bill is survived by his wife of almost 63 years, Joyce Penticoff, his daughters, Luanne Penticoff Grotbeck and husband Greg of Adrian, MI, Karen Penticoff Gorsline, and husband, Robin of Freeport, his son, Douglas Penticoff and wife, Mirtha of Rancho Viejo, TX; grandchildren, Michael Gorsline (Jenna), Collin Grotbeck (Lindsey), Shawn Gorsline (Ashley), Blair Grotbeck (Alicia), and Hailey and Morgan Penticoff; Great-grandchildren, Natalie and McKenna Gorsline, William and Brooklyn Grotbeck, and Carter Gorsline; one sister, Jo Penticoff Barnard of Milpitas, CA. Bill was preceded in death by his mother, father, grandparents, and brother, James Penticoff. Bill’s family would like to thank the staff at Davita Driftwood Dialysis Center and FHN for their many years of compassionate care. He absolutely loved all of his caregivers! Bill was definitely a Freeport icon and will be sorely missed by us all! Visitation will be Tuesday, September 21 from 5:00 - 8:00 P.M. at Burke-Tubbs funeral Home in Freeport. Visitation will also be Wednesday, September 22 from 10:00 - 11:00 A.M. at Park Hills Evangelical Free Church, 2525 W Stephenson St, Freeport, IL 61032. The funeral service will follow at 11:00 A.M. with Pastor Mark Balmer officiating. The committal graveside service will take place following the funeral at the City Cemetery in Freeport, IL. A memorial fund has been established in Bill’s memory to help a variety of Bill’s favorite organizations.

The family of William "Bill" Raymond Penticoff created this Life Tributes page to make it easy to share your memories.

Send flowers to the Penticoff family.