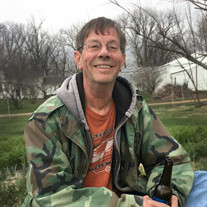 Bill was born to Donald & Betty White in Polo, IL, June 5, 1956. He passed away unexpectedly but peacefully in his home November 10, 2021. Bill enjoyed a childhood growing up on the family farm in rural Polo. He loved hunting and fishing and being outdoors, all interests he enjoyed the entirety of his life. He graduated from Polo Community High School in 1974 and began work at Mid America Plastics in Forreston, IL. He was employed as a foreman there until his retirement in August of this year. In 1977 Bill married the love of his life, Charlene Buffington. They enjoyed 44 years of adventure and marriage. They raised their children Shaunna and Chauncy in a home full of love less than a mile from where Bill had been raised. Bill was a genuine person, a true, dependable friend and will be remembered as such. He was loyal and hardworking and valued honesty and integrity. He had a quiet nature but did possess a certain playful “quirkiness” and was as full of “Bill-isms” as he was wisdom. He was an avid outdoorsman and there was little he enjoyed more than being outdoors and sharing the outdoors with those he loved. Bill is survived by his wife, Charlene, his daughter Shaunna (Mike) Zettle, his son Chauncy White, three granddaughters, Eleanor Zettle, Sophia Clarke & Faelyn Zettle, his sister Sandy (Greg) Cross and his sister Donna (Gary) Yeager, many beloved nieces and nephews and loved ones. Bill is preceded in death by his parents, Donald & Betty White, his in-laws Bob & Janet Buffington, and his nephew Eugene Frey. Funeral services will be 10:00 a.m. Tuesday November 16, 2021, at First United Methodist Church. Pastor Sung Eun Kim will officiate. Burial will be at West Branch Lutheran Cemetery, Haldane. Visitation 4:00 p.m. - 7:00 p.m. Monday November 15, 2021, at Burke Tubbs Funeral Home, Forreston. There will also be a visitation on Tuesday 9:00 a.m. until the time of service at First United Methodist Church. At the visitation and service the family encourages family and friends to leave a memory of Bill in a container that will be marked for memories. A memorial has been established in Bill's memory. Please sign his guestbook and share a remembrance at www.burketubbs.com

Bill was born to Donald & Betty White in Polo, IL, June 5, 1956. He passed away unexpectedly but peacefully in his home November 10, 2021. Bill enjoyed a childhood growing up on the family farm in rural Polo. He loved hunting and fishing... View Obituary & Service Information

The family of William "Bill" F. White created this Life Tributes page to make it easy to share your memories.

Send flowers to the White family.