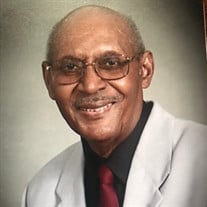 John B. Shipp was born on May 12, 1925 to Dave Shipp and Estelle Logan-Shipp in West, Mississippi. John was the 7th of 15 children. Growing up John attended school in West and joined the West Baptist Church at an early age. John enlisted into the United States Navy as a teenager and served in World War II as a 3rd Class Steward. His job on the ship was a Gunner. They were responsible for the operation and maintenance of missile launch systems. Although John honorably served his country he and his fellow African American sailors were still subjected to segregation. His military experiences affected him so much emotionally he refused to discuss what he saw for many years. The gruesome human deaths of his shipmates were devestating enough, but he also saw the severed bodies of the Japanese Kamikazes who were shot down and landed on the deck of his ship, the USS Columbia. Once he served his tour of duty John moved to Freeport, Illinois where he met his future bride, Mamie A. Brumfield. They were married on the wedding anniversary of her parents, John L. and Rosie Lee Hill-Brumfield on December 22, 1949 at her maternal grandmother's home, Mamie Farr. In spite of struggling through the Jim Crow era, John and Mamie survived and thrived. In March 1950 they moved to Detroit, Michigan, but just a few months later they moved to Chicago, Illinois where three of their children, Ralph, Arthur and Patricia were born. In 1959 John and Mamie moved to Freeport, where their youngest son, Randy was born. They decided to move back to Freeport because it was a safer place to raise a family and school system would be better for their children. John worked extremely hard to support his family. He held two full-time jobs for years at Newell Companies and Structo Manufacturing. Additionally, John, as a special deputy for the Stephenson County Sheriff's Department, often worked on the weekends. John was also a devoted member of St. Paul Missionary Baptist Church. He was the president of the usher board and a deacon. As missionaires, John and Mamie always spent time with the elderly in nursing homes on Wednesdays after prayer meeting at the church. Their visits were not limited to members of the church they spent time with anyone who invited them into their rooms. They also visited any members who may have been ill or shut-in at home. John is survived by his wife, Mamie, his four children, Ralph, (Francina), Oswego, IL, Arthur, (Joanne),Hanover Park, Patricia, Oswego, and Randy (Bridgett), Bolingbrook, IL. Additionally, his seven grandchildren, LaKeisha, Jamesha, Gerard, Andrea, April, Ashia and Sydney as well as six great-grandchildren and three sisters, Cora Bell, Waterloo, IA, Margaret, Chicago, IL and Lucille, Detroit, MI. Johns parents, eight brothers and three sisters preceded him in death. John always lived his life with honesty and integrity. He will be deeply missed by his family and a host of friends.

John B. Shipp was born on May 12, 1925 to Dave Shipp and Estelle Logan-Shipp in West, Mississippi. John was the 7th of 15 children. Growing up John attended school in West and joined the West Baptist Church at an early age. John enlisted... View Obituary & Service Information

The family of John Berry Shipp created this Life Tributes page to make it easy to share your memories.

Send flowers to the Shipp family.