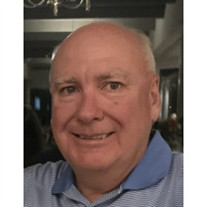 David Earl Lahne, 62, of Shiloh, Illinois, and formerly of Freeport, passed away Wednesday October 14, 2020 at St. Elizabeth Hospital, in O'Fallon, Illinois. David was born October 5, 1958 in Pekin, Illinois, the son of Robert and Alice (Huette) Lahne. David married Vicki Knoll September 19, 1981 in Freeport. David proudly served his country in the United State Air Force. He started his military career in 1980 his first base was Cannon Air Force base in Clovis New Mexico. He was then transferred to Scott Air-force Base in Illinois. Then for a short time at Offutt Air Force base in Nebraska, where his son Ryan would meet his wonderful wife, Laura who was also from a military family. David was then transferred back to where he and Vicki really wanted to be at Scott Air Force base for their final tour. This also afforded them to be closer to family. After retiring from the Air Force they remained in the area where David became a contractor for the government as a Principle Database Administrator. He was a member of the Fraternal Order of Eagles Aerie # 545. Where he participated and coordinated many activities. Golf was one of his passions, he started playing golf at Park Hills when he was a student at Freeport High School and never slowed down. He had a close group of friends that he enjoyed playing golf with and always looked forward to their outings. David was an avid sports fan; with the Chicago Cubs being his favorite team to follow. He could have been a commentator with his knowledge. Which he has passed onto his son. Above all he had an extreme love for his family. Family was always first and foremost to his David. Surviving are his wife, Vicki Lahne; son Ryan (Laura) Lahne; daughter, Sarah (Tristan) Hunter; three sisters, Lydia (Dr. Dennis) Bowen, Lois (Paul) Dixon, and Diane (Dr. Paul) Willis; and three grandchildren, Brandon and Allison Lahne and Ella Mae Hunter. David was preceded in death by his parents. Funeral services will be 2:00 p.m. Monday October 19, 2020 at Burke Tubbs Funeral Home. Rev. David Spooner will officiate. Visitation will be 12:30 p.m. until the time of service Monday also at Burke Tubbs. Burial will be in Chapel Hill Memorial Gardens. A memorial has been established in his memory. Please sign David's guestbook and share a remembrance at www.burketubbs.com

The family of David Earl Lahne created this Life Tributes page to make it easy to share your memories.

David Earl Lahne, 62, of Shiloh, Illinois, and formerly of Freeport,...

Send flowers to the Lahne family.