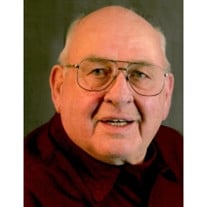 Jerry Paul Daws, age 81, died Saturday evening, January 2, 2021 at his Forreston home where he was cared for by his family and Ogle County Hospice. He was born in Freeport, IL, on December 12, 1939 to parents Royce and Harriet Daws. He married Kristine Krug Daws on September 17, 1966 in Stockton, IL. He loved and will be greatly missed by his wife, two sons, and four grandchildren. Sons are Jeffrey (Tamra) Daws of Simpsonville, SC and Brian Daws of Forreston. Grandchildren, Andrew Daws (fiancée Jessey Neder) of Fredrick, Maryland; Aleksandra Daws of New York City; Hunter Daws of Des Moines, Iowa, and Carter Daws of Forreston. Jerry is a lifetime member of Forreston First United Methodist Church. He graduated from Forreston High School in 1958. He proudly served his country as a United States Marine from 1962 - 1965. He is a 54 year member of the American Legion and served several terms as Commander of the Forreston Post. During that time, he also was a member of the Society of Forty Men and Eight Horses. He was a lifelong farmer, dedicated to soil conservation, a third generation purebred Poland China hog producer, and also raised beef cattle. Later in life (2004 onwards), he focused primarily on corn and soybean farming. He received the Conservation Farmer of the Year award for Ogle County in 1978. Jerry served six years on the Poland China Record Association Board with five years as President. The Ogle County Pork Producers Association was organized with his leadership. He served on the Ogle County Board for 30 years from 1974 - 2004 and served as Chairman for 14 years from1978 - 1979 and 1990 - 2002. He received leadership awards for years of service from Blackhawk Hills Economic Development (1996) and from the Northwest Illinois Criminal Justice Commission (2002). He helped establish the Serenity Hospice and Home located in Oregon and Focus House for Youth in Rochelle. Other survivors include his brother, Jack (Donna) Daws of Forreston; and two nieces and two nephews. He is predeceased by his parents and brother, Jim Daws. The family extends their sincere thank you to all FHN staff members, Ogle County Serenity Hospice and Home, Forreston Ambulance Service and our dear friends, especially Harrell Wiggins and Henry Huenefeld for your support. A memorial fund has been established in Jerry's name. Please sign Mr. Daws guestbook and share a remembrance at www.burketubbs.com "Semper Fidelis = Always Faithful" "Fidelis Ad Mortem = Faithful Unto Death"

Jerry Paul Daws, age 81, died Saturday evening, January 2, 2021 at his Forreston home where he was cared for by his family and Ogle County Hospice. He was born in Freeport, IL, on December 12, 1939 to parents Royce and Harriet Daws. He married... View Obituary & Service Information

The family of Jerry Paul Daws created this Life Tributes page to make it easy to share your memories.

Send flowers to the Daws family.