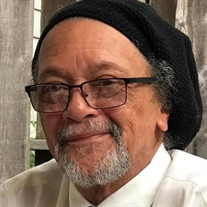 FREEPORT, IL - Michael J. Taylor, 72, of Freeport, passed away, on Sunday, March 27, 2022 at FHN Memorial Hospital after a fight with lung disease. He was born in Freeport on October 24, 1949 to Jacqueline Taylor who later married James Anderson. Michael attended Taylor Park School through the third grade before moving to Clinton, Iowa with his parents and attending school there through the sixth grade. The family then moved to Compton, California where he graduated from Compton Senior High School in 1967. After graduation, Michael returned to Freeport briefly before enlisting in the Air Force in 1968. He served as Sergeant crew chief mechanic on the flight line from 1968-1972. Michael was stationed in Tacoma, Washington at McChord Air Force Base. After his honorable discharge in 1972, Michael returned to Freeport to work in drafting at Micro Switch. He later started the Tool and Die Apprenticeship program through Highland Community College. Over the course of his 47 year career at Micro Switch/Honeywell, he did many different types of work including drafting, tool and die, and prototyping. In 1994, he also earned a patent for the mass airflow sensor. On July 14, 1984, Michael married the love of his life Sandra Gabel. They met in 1977 in Freeport and enjoyed 45 wonderful years together. They remained in Freeport where they raised their daughter Natalie. Over the years they enjoyed lots of traveling, but especially treasured their many family trips to Jamaica. Michael was also an active member of the community through his service to the Freeport Public Library Board of Trustees from 1996-2004. He was also on the Building Committee for the construction of the new public library that was completed in 2003. The new library was a major source of pride for Michael. He also graduated from the 2001 Leadership Institute through Highland Community College. Michael will be remembered for his intelligence, great sense of humor, and his kind heart. He was one of a kind and touched the many lives of people from all walks of life. Michael loved listening to music, going to concerts, and drinking a beer with a friend. He could fix anything and was an excellent cook. He was always willing to lend a helping hand and could strike up a conversation with just about anyone. Michael is survived by his wife Sandra and daughter Natalie Taylor of Freeport, as well as many dear friends and family members. He was preceded in death by his father James Anderson, his mother Jacqueline Taylor, and many dear cousins. A visitation will be held from 4-7 pm at Burke Tubbs Funeral Home on Wednesday, March 30. Funeral services will be at 2 pm on Thursday, March 31, at Burke Tubbs Funeral Home with burial at Freeport City Cemetery and a meal to follow. In lieu of flowers, a memorial fund has been established in his name for Voices of Stephenson County.

FREEPORT, IL - Michael J. Taylor, 72, of Freeport, passed away, on Sunday, March 27, 2022 at FHN Memorial Hospital after a fight with lung disease. He was born in Freeport on October 24, 1949 to Jacqueline Taylor who later married James Anderson.... View Obituary & Service Information

The family of Michael J. Taylor created this Life Tributes page to make it easy to share your memories.

Send flowers to the Taylor family.