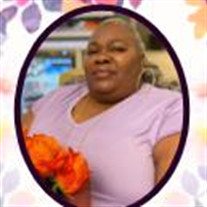 Shirley Dean Williams, born 1956, into the union of Lucy Lee Wilson and Charley Tellery in Crenshaw, Mississippi frantically celebrated her birth on the 16th and 17th of July. In Shirley’s childhood years, she relocated with her family to Chicago, Illinois. As a resident of South Chicago community, Shirley attended James N Thorp Elementary School. Shirley then continued her education and received her diploma at Christian Fenger High School. Shirley pursued a law career at Olive Harvey College, but realized her time and efforts were better valued devoted to her family. Shirley maintained employment in the service industry. Throughout her life, Shirley held various positions that allowed her to serve the public, always adding her own special touch in every interaction. Shirley wore many hats and gained many titles. Shirley, commonly known as “Ma” to many and affectionately known as “Auntie” to so many others was recognized as a pillar to the community in which she dwelled. Shirley was especially loved by children. Shirley’s nurturing nature compelled her to love and spoil children near and far, family or not. No child was ever left out in Shirley’s care or presence. Shirley had undying love for babies, especially ones in need. Admired for her strength, her wisdom and her over-pouring heart, Shirley was the “ go to” for so many. Whether you needed a shoulder to lean on, a couple dollars til payday, words of wisdom or a place to go, Shirley would be there front and center with no hesitation. Shirley carried the love of God within her and shared it with whomever she encountered. Shirley’s biggest joy was family. Whether in person or over the phone, Shirley sincerely cherished each moment shared with loved ones. You could visit and enjoy a true feast or call her and be on the phone for hours. Shirley was also an avid shopper, if there was a bargain to be found, Shirley definitely found it. Shopping was surely her favorite pastime. Shirley dedicated her life to Christ at an early age at Trinity Tower Spiritual Church under the leadership of Rev. B. L. Galette. Shirley served on the Usher Board, in addition to performing as a Missionary. Shirley ministered the word of God everywhere she went, first and foremost within her own home initiating prayer service daily. Shirley let her light shine freely and never failed to be a beacon for those in need. Shirley departed this life on November 29, 2021. Shirley was preceded in death by her Father; Charley Tellery, her Bonus Father; William H. Wilson, her Mother, Lucy Lee Wilson, her Husband; Gregory Williams, her Brother; William H. Wilson Jr, her Brother; William P. Jackson,her brother Gilbert Renalds; her Sister; Muriel Dodd, her Sister; Denise Goings, and her son; Tredon L. Hill. Shirley leaves to cherish her memories: Sister; Narvell Williams (James), Brother; Charley Tellery, Sister; Arlean Tellery, Brother; Richard K. Wilson, Brother; Timothy H. Wilson, Sister; Jeanette Jones, Sister; Lineda Lockhartt-Jackson, Brother; Karl, Brother: Vince, Brother; Rodney, Brother: Cleve (Tasha), Brother; Steve (Aylana), Sister; Mossie, Sister; Lillie, Sister; Jean, Sister; Meterzee, Olivia; Sister: Faye. Children: Herneidra S. Tellery, Celissia N. Blandon, Candace T. Wilson, Marcus L. Porter (Krystal), Thadeus O. Wilson, Kayla Q. Tellery, Serena, Gregory, James, Michael, Eddie, Dion, Maurice, Corey, Gechie, Consuello, (Tommy), Monique. Grandchildren: 36, 1 Great-grandchild and another one on the way; a first niece and nephew; Carolyn Tellery and Therian D. Johnson, raised as if they were her own. A host of other nieces, nephews, relatives, and friends. Special friend Craig Brown. Special tribute to her Aces: Diva Elliot, Tracy Walton, Carletta Wilson, Alana Sanders, Lisa Mcclellan, Debbie Durr, Carolyn Maxwell, Penny Man, DiMaggio, Fred, and Sheree Williams. She will truly be missed! 𝐇𝐨𝐦𝐞-𝐠𝐨𝐢𝐧𝐠 𝐟𝐨𝐫 𝐒𝐡𝐢𝐫𝐥𝐞𝐲 𝐃. 𝐖𝐢𝐥𝐥𝐢𝐚𝐦𝐬 Tuesday, December 7, 2021. Mt. Carmel Missionary Baptist Church 602 S Chicago Ave, Freeport, IL 61032. 𝑽𝒊𝒔𝒊𝒕𝒂𝒕𝒊𝒐𝒏 will be at 1:00pm and the 𝑯𝒐𝒎𝒆-𝒈𝒐𝒊𝒏𝒈 𝒔𝒆𝒓𝒗𝒊𝒄𝒆 will follow at 2:00pm. Colors: Beige, Tan, and Gold. Women of the family are adding leopard because my Grandma loved leopard. A 𝑩𝒂𝒍𝒍𝒐𝒐𝒏 𝑹𝒆𝒍𝒆𝒂𝒔𝒆 will be held after the service, followed by the 𝑹𝒆𝒑𝒂𝒔𝒕 at “Bourbons on Main/Hampton Inn”.109 S Galena Ave, Freeport, Il 61032; 4:00pm - 6:00pm. Please sign the guestbook and share a remembrance at www.burketubbs.com.

Shirley Dean Williams, born 1956, into the union of Lucy Lee Wilson and Charley Tellery in Crenshaw, Mississippi frantically celebrated her birth on the 16th and 17th of July. In Shirley&#8217;s childhood years, she relocated with her family... View Obituary & Service Information

The family of Shirley D. Williams created this Life Tributes page to make it easy to share your memories.

Send flowers to the Williams family.