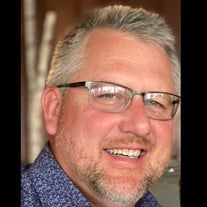 Adam G. Holder, 48, of Freeport, passed away on Thursday, January 27, 2022, at FHN Memorial Hospital, Freeport. Adam was born on June 25, 1973 in Freeport, Illinois to Stephen and Pamela (Rawson) Holder. Adam was a lifelong resident of Freeport. He graduated from Freeport High School in 1991 and University of Wisconsin-Platteville with a bachelor’s degree in Civil Engineering in 1996. He married Jennifer (Thompson) Holder on November 22, 1997 in Lancaster, Wisconsin. They have four children. Adam joined Fehr Graham as a Staff Engineer in 1996 and found a niche working with municipalities, which led to project management responsibilities and, in 2005, partnership. Through his work at Fehr Graham, Adam guided resource management for various communities. Adam served on the Freeport Park Foundation Board and Freeport Planning Commission as well as many other organizations. Adam was an Engineering instructor at Highland Community College from 2008-2012. Adam was a devoted father. Through his children’s love of sports, he was a dedicated and active supporter of Aquin Catholic Schools and his community. He was a coach at Aquin for both basketball and baseball. He also coached and was a board member for the Stix organization since 2009. Adam’s best times were spent with family and friends, boating on Lake Carroll, coaching, and cheering on the Cubs. His friends and family would describe him as a humble, selfless, genuine, caring, and loving man. He has left an incredible void in the hearts of many. Adam’s biggest pride was his family. Surviving are his wife, Jennifer; his children Jackson, Emma, Megan, and Andrew; his parents Stephen and Pamela; sisters Sarah (Charles) Williams and Allison (Todd) Slama and nieces and nephews; paternal grandmother, Della Martin. He was preceded in death by his paternal grandfather, Bernham Martin and maternal grandparents Edward and Jacqueline Rawson. A memorial service will be held on Tuesday, February 1, 2022, at St. Thomas Aquinas Church at 10:00 AM. The visitation will be held on Monday, January 31, 2022 at Burke-Tubbs Funeral Home in Freeport from 4:00-8:00 PM. In lieu of flowers, memorials have been established in Adam's memory and can be contributed through Venmo under @Holder-Memorial and also at https://venmo.com/u/Holder-Memorial Services will be live streamed at: 1. St. Thomas Aquinas Website https://venue.streamspot.com/event/MzA0NDIxNA== 2. St. Thomas Aquinas Face Book page https://www.facebook.com/Stthomasaquinasfreeport

Adam G. Holder, 48, of Freeport, passed away on Thursday, January 27, 2022, at FHN Memorial Hospital, Freeport. Adam was born on June 25, 1973 in Freeport, Illinois to Stephen and Pamela (Rawson) Holder. Adam was a lifelong resident of Freeport.... View Obituary & Service Information

The family of Adam G. Holder created this Life Tributes page to make it easy to share your memories.

Adam G. Holder, 48, of Freeport, passed away on Thursday, January...

Send flowers to the Holder family.