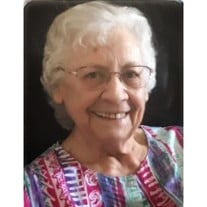 Betty Jean Lovekamp, 89 of Freeport, formerly of Normal, passed away on Saturday, January 9, 2021, at home in Freeport. A celebration of her life will be held at a later and safer time. Entombment will be at the East Lawn Memorial Gardens in Bloomington. In lieu of flowers, memorials may be made to the radio ministry at Our Redeemer Lutheran Church, 1320 S Blackhawk, Freeport, IL 61032. Betty was born on September 2, 1931 in Bloomington, IL. She married Glen Lovekamp on October 2, 1955 in Springfield, IL. Betty is survived by three sons, Paul (Vicki) Lovekamp of Sayre, PA, James (Andrea) Lovekamp of Valparaiso, IN, and David Lovekamp of Normal, IL and daughter Diane (Mark) Wakeley of Freeport, IL; six grandchildren, Jordan (Kristina Kaecker) Wakeley of Sterling, IL, Joshua (Nicole) Wakeley of Freeport, IL, Austin Lovekamp of Valparaiso, IN, Kaleigh (Oliver) Kamp of Indianapolis, IN, Camden Cilento and Colby Cilento of FL; and five great grandchildren, brother Larry(Mozetta)Wilcox of Waxhau, NC. and many nieces and nephews. She was preceded in death by her husband Glen Lovekamp, parents Clarence and Marguerite (Koch) Wilcox, three sisters; Virginia Gannaway, Rose Mary Otto, and Lorea Wilcox, five brothers; Donald Wilcox, Harold Wilcox, Melvin Wilcox, Ralph Wilcox and Gary Wilcox. Betty and Glen were both avid bowlers. Betty was inducted into the B.W.B.A Hall of Fame in 1986. She was the director of the Youth Bowling program in Bloomington for many years and cherished her relationships with the coaches and children. She and Glen enjoyed bowling in many leagues and tournaments throughout their many years together. Betty was a proud founding member of the Bloomingon-Normal Genealogical Society and greatly enjoyed her genealogical research. She fondly recalled her first job at Mennonite Hospital in Bloomington. She also worked for State Farm Insurance and Franklin Life. She and Glen always enjoyed playing pinnochle with their children and grandchildren. Throughout the last several years she had been a patient at the Leonard C. Ferguson Cancer Center in Freeport. She was treated like family and was very appreciative of the care given by Dr. Shaikh and the entire staff at the center. A special thank you to the staff of Hospice for their kindness as well.

Betty Jean Lovekamp, 89 of Freeport, formerly of Normal, passed away on Saturday, January 9, 2021, at home in Freeport. A celebration of her life will be held at a later and safer time. Entombment will be at the East Lawn Memorial Gardens... View Obituary & Service Information

The family of Betty J. Lovekamp created this Life Tributes page to make it easy to share your memories.

Send flowers to the Lovekamp family.