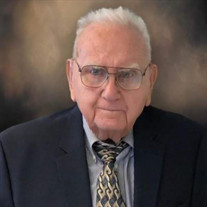 Charles was born on January 23, 1925 to Myrtle and Charles Kuntzelman, Sr. at Freeport Illinois. Charles was the youngest of his siblings, Ray, Cletus, Glenn, Bertha, Iva and Thelma. Thelma was seven years older than Charles. Charles’ parents and siblings have all preceded him in death. Charles married Esther L (Saxby) Thompson on March 30, 1962. Along with gaining a lovely wife, Charles also became the new father of Esther’s four children by a previous marriage. He then, adopted them all within the next year. Later, Esther gave birth to their final child, Errol Blaine. Charles’ children are Teresa David of Freeport and Errol Blaine of FarrWest, Utah. Preceding Charles in death are his wife, Esther and their children: Michael, April and Jeanne Williams. Charles also was a grandfather to eight children: Teddy, April, Lacey, Heather, Melissa, Ammory, Kamen, and Teig. Further, he was the great-grandfather of nine children and the great-great-grandfather of seven children. Charles attended Freeport Senior High School and played football, and also, a member of the Letterman Club. He graduated on June 10, 1943 and entered the Navy immediately afterward. Charles was a US Navy veteran of World War II. He served on a PBY–5A as the plane mechanic and performed sea rescue duties. The plane crashed at the base of Old Woman’s Mountain on Kodiak Island , Alaska in 1945. 15 crew and passengers were aboard. Eight were killed. The aircraft, after several failed approaches in severe weather, flew into rising terrain and stalled while attempting to climb out of the situation. Upon stalling, the aircraft plunged nose first into the ground. However, Charles and six other crew members did survive with extensive severe injuries. Later, as a civilian, Chuck flew a Cessna 150 which did have a forced landing outside of Freeport. Luckily, he landed it safely in a cornfield, and Chuck walked away from that incident. Not too many people can ever say they have gone down in a plane twice and lived to tell the tale. Chuck worked many years at the Honeywell plant in Freeport as an assistant engineer. He had been a mail carrier for USPS prior to his position at Honeywell. After Chuck retired he again became a rural mail carrier for the USPS on a part-time basis. Although, part time, it seems he worked fairly regularly and retired from that position at the age of 88! Charles and Esther were active members of the Church of Jesus Christ of Latter-Day Saints for over 50 years. Chuck served in the church in many capacities and was always happy to serve others. Chuck and Esther gave up their talents and time to their church and did serve a church mission in their 60s in California. They also, gave services to Freeport Manor Nursing Home, now, Pearl Pavilion calling bingo each week for several years. Charles had a few nicknames: Chuck, Charlie, Red, Buddy, and Bud. He had a keen sense of humor and had sparkling blue eyes and red hair. One of his most favorite pastimes was fishing. He further had a passion for building remote control airplanes and was a member of the Freeport Radio Control Modelers AMA Chartered Club # 253. Charles learned to play the harmonica from his uncle when he was 12 years old. He worked various jobs on farms during the summers and by age 15, he had saved enough money to buy a coveted harmonica at the price of $80. He also, played the accordion although not recently. Charles loved to sing and would often break out into song at any moment. He truly enjoyed silly songs that he learned with his sister, Thelma when they were young. One of his favorite songs was Blue Skies. He occasionally wrote poems for his children for their birthdays. After Esther’s death in early 2019, Charles went to stay with his daughter, Teresa. He remained with her for over two years. Both felt blessed by this time together. Unfortunately, Chuck began to have a serious problem with Dementia. Chuck started wandering the home during the night without lighting and fell and broke his foot. Subsequently, he had to be hospitalized and eventually became a resident of Medina Nursing Home in Durand Illinois. He did seem to be content at the home for the most part. The cause of Charles’ death was Covid with complications. The staff members at Medina gave caring and competent care to Charles. Their service and efforts are greatly appreciated. Charles was truly one of the good men of our times. He was loved and respected. He will be missed greatly. Funeral services will be held at the Church of Jesus Christ of Latter-Day Saints at 1716 S. Forest Rd., Freeport. Visitation will be at 1:00 p.m. and the Service at 2:00 p.m. A short dedication will be held at the grave site at Chapel Hill Cemetery, Freeport following the Service. A charitable memorial fund has been established to be presented to the Wounded Warrior Project in Mr. Kuntzelman's memory.

Charles was born on January 23, 1925 to Myrtle and Charles Kuntzelman, Sr. at Freeport Illinois. Charles was the youngest of his siblings, Ray, Cletus, Glenn, Bertha, Iva and Thelma. Thelma was seven years older than Charles. Charles&#8217;... View Obituary & Service Information

The family of Charles S. Kuntzelman Jr. created this Life Tributes page to make it easy to share your memories.

Send flowers to the Kuntzelman family.