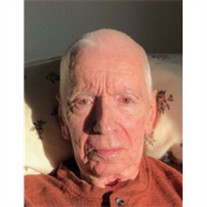 Charles F. Svihlik, 77, of Forreston, passed away peacefully in his home on January 1, 2019. Charles was born on May 5th, 1941 to Frank and Lydia (Barta) Svihlik in Chicago, Illinois. He graduated from Proviso East in 1959. Charles married the love of his life, Marianne, on October 28th, 1963 in Oak Park, Illinois. Their love brought into this world three children: Charles W., Timothy, and Jeannine. They celebrated their 55th wedding anniversary by renewing their vows. Charles had a great love for the outdoors, trains, building model airplanes, and reading - especially about American history and novels by Dean Koontz and James Patterson. He worked at Quebecor Printing doing bindery and office copies for many years, retiring in 2004. Charles is survived by his beloved wife, Marianne, his children Charles (Terry) Svihlik, Timothy (Jody) Svihlik, and Jeannine (Bob) Nalley, and grandchildren Jenny, Jarett, Peyton, and Justyne. Charles is preceded in joining our Heavenly Father by his mother and father. A visitation will be held on Friday, January 4th from 5-8 p.m. at Burke Tubbs Funeral Home in Forreston. Services will be held 10:00 a.m. Saturday, January 5th at Burke Tubbs with a visitation from 9:00 a.m. until the time of service. Graveside prayer to follow at his final resting place at Lightsville Cemetery in Leaf River. A luncheon is to follow at the Leaf River Complex from 11-2 p.m. Please sign Charles guestbook and share a memory at www.burketubbs.com. In lieu of flowers, donations can be made to the Forreston Fire Protection District or Serenity Hospice and Home in his memory.

Charles F. Svihlik, 77, of Forreston, passed away peacefully in his home on January 1, 2019. Charles was born on May 5th, 1941 to Frank and Lydia (Barta) Svihlik in Chicago, Illinois. He graduated from Proviso East in 1959. Charles married... View Obituary & Service Information

The family of Charles F. Svihlik created this Life Tributes page to make it easy to share your memories.

Send flowers to the Svihlik family.