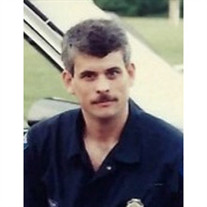 Daniel P. Prather 1956 - 2021 Daniel P. Prather, 64, died unexpectedly Friday, February 5, 2021 at Freeport Memorial Hospital (FHN). He was born to Jack and Bobbie Prather in Ames, Iowa in August 1956. Dan graduated from Freeport High School in 1974. He married the love of his life, Marci Fosler Prather in February 1979. Dan proudly served as a Freeport police officer for many years. He considered himself an "old-time street cop." He and his fellow officers walked the streets getting to know people in Freeport in what he described as "proactive policing." Later in his career, he established the K9 unit in Freeport's Police Department and served as Freeport's K9 officer with his beloved dog, Cody. They were an inseparable team, training continuously, and supported numerous state and federal officers with their work. Dan enjoyed helping people in times of trouble. His work gave him many opportunities to do just that, and he was a steady presence to many in their hour of need. After retiring Dan was able to pursue his talents in woodworking, and spending time helping friends with projects big and small. More recently, his favorite way to spend a day was with his beloved granddaughters. He is remembered fondly for his unforgettable laughter, kind heart, generosity and larger than life personality. Dan and Marci had two children, Nichol (Kyle) Borneman and Seth (Arika) Prather both of Freeport. He loved doting on his three granddaughters, Jordyn, Ella and Layla. In addition to Marci, Dan is mourned by his five sisters, Maureen (Phil) Johnson, Christine Prather-Brandt, Elizabeth (Rick) Wolfe, Martha (Ron) Highland and Susan (Kurt) Miller. Fifteen nieces and nephews, nine great-nieces and great-nephews as well as countless friends. His parents, Jack and Bobbie predeceased him as did a niece, Emily. His was a life well lived and filled with many blessings. A private memorial service will be held at Burke-Tubbs Funeral Home in Freeport. In lieu of flowers, a memorial fund has been established. Please sign Mr. Prather's guestbook and share a memory at www.burketubbs.com

The family of Daniel P. Prather created this Life Tributes page to make it easy to share your memories.

Send flowers to the Prather family.