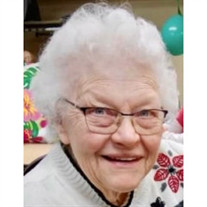 Delores A. Ludwig 1935-2020 Delores A. Ludwig, 85, of Forreston departed this earthly life on November 16, 2020. She was born May 18, 1935 in Brookville, Illinois the daughter of Donald W. Smith and Mabel V. (Krusey) Smith. She married Arlyn D. Ludwig on October 25, 1959. Together they had two daughters, Kelly Ludwig Orth and Amy Ludwig Adkins. She enjoyed her four grandchildren, Carson Swalve, Elyse Adkins, Paxton Orth, and Garrett Adkins. Delores celebrated the birth of her first great grandson, Declan Hartman. Delores is survived by her children, her grandchildren, her great grandson, her sister, Barbara (Stanley) Toomsen of Shannon, and brother, Harlan Smith of Rockford. She is predeceased by her husband, Arlyn, her parents, her brother Homer C. F. Smith, and her niece, Lora Mae Smith. A private service was held at Chapel Hill Memorial Park in Dixon.

The family of Delores A. Ludwig created this Life Tributes page to make it easy to share your memories.