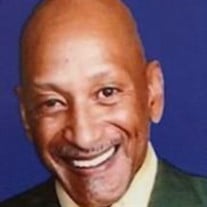 On September 3, 2021, in the loving arms of his wife Patricia (Brooks) Brumfield, Dennis Maurice Brumfield peacefully departed this earthly life, to enter into the presence of his Lord and Savior, Jesus Christ. Dennis was born November 5, 1949, in Chicago, IL. to the late John Brumfield and Lucean (Honey) McNair Brumfield. He graduated from Edison High School in Gary, Indiana in 1967 and served in Vietnam from 1967 thru 1969. Dennis returned to Freeport in 2008 and married the love of his life, Patricia (Brooks) Brumfield, on September 9, 2009. In 2010, he graduated from Gateway College in Racine, WI. with a marketing degree. Dennis loved his wife Patricia unconditionally and together they shared their love with others. He left a legacy of love to his wife, his family, church members and friends. He had a heart full of love for everyone who crossed his path. He saw the good in people and made himself available to help individuals while providing a genuine word of encouragement to others. He was very involved in Narcotics Anonymous where he worked with individuals and groups on their addictions. Dennis loved traveling from city to city inspiring others and making a difference in the lives of those he touched. His community involvement in Freeport also included Little League Baseball and coaching the young players during games at Little Cubs Field. For several years, he served as the President of the Freeport High School Black Alumni Reunion Committee. Dennis was a faithful, dedicated, and cherished member of Faith Center where, in 2016, he served as the chair of the Men’s Ministry and assisted in the jail ministry. His relationship and his walk with God were very important to him. Dennis was a community advocate who continuously spoke out on issues concerning economic and social justice. Earlier this year, he ran for Alderman in Freeport’s 6th Ward. Dennis helped spouses navigate through the bureaucracy in order to receive benefits from loved ones lost while serving their country. He was a member of the NAACP and chaired the Armed Services and Veterans’ Affairs Committee. Dennis was committed and excited about each of his endeavors because of his special love for people and issues that impacted his community. Dennis Maurice Brumfield leaves to cherish his memory his loving wife Patricia of Freeport; sons, Seth Brumfield of Rockford, IL and Gaylen Jackson of Minneapolis, MN; brothers, Gregory Brumfield of Freeport and Ralland Brumfield of Racine, WI; godsisters, Karen Portis of Rockford, IL and LaFrancine Baker of Freeport; 13 grandchildren, 11 great-grandchildren, special friend Carl Bates of Rockford, IL., and a host of aunts, uncles, cousins, nieces, nephews, and friends. Dennis was preceded in death by his parents, John L. and Lucean P. (McNair) Brumfield; 1 son, Jonathan; paternal grandparents, John Sr. and Rosalie Brumfield; and maternal grandparents, Joseph and Lucean McNair. Special thanks to Hospice of Mercy Hospital of Rockford who worked tirelessly to ensure his comfort during his final days. Funeral services will be held on Saturday, September 11, 2021, at 11:30 a.m. at Faith Center Freeport, 203 W. Pleasant St., in Freeport, IL. Apostle Michael Sowell officiating. Visitation will be at the Center from 9:30 a.m. until the time of service. Masks and social distancing will be observed. Burial will be in the Freeport City Cemetery.

On September 3, 2021, in the loving arms of his wife Patricia (Brooks) Brumfield, Dennis Maurice Brumfield peacefully departed this earthly life, to enter into the presence of his Lord and Savior, Jesus Christ. Dennis was born November 5, 1949,... View Obituary & Service Information

The family of Dennis M. Brumfield created this Life Tributes page to make it easy to share your memories.

Send flowers to the Brumfield family.