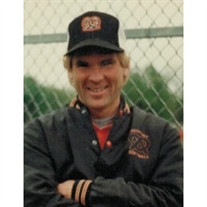 Dennis C. "Slinger" Holsinger, 71, of Cedarville, died Sunday, July 23, 2017 at Liberty Village, Freeport. He was born May 15, 1946 in Freeport the son of Charles Keith and Dorothy (Schneider) Holsinger. Dennis was a 1964 graduate of Freeport High School where he excelled in sports. He was a United States Army Veteran. Dennis was a member of Faith United Methodist Church. He was an avid Indianapolis Colts, Atlanta Braves and Boston Celtics fan. He loved dogs, especially Huskies which he raised and took dog sledding. He had a love for animals and was a member of Friends Forever Humane Society. Denny was a longtime area coach at Freeport High School and Highland Community College. He coached basketball, soccer and women's softball. Denny started the men's Freeport High School Pretzel Soccer team in 1983, and in four short years he had the team competing at the highest levels. Denny devoted his life to enriching the lives of young athletes. Slinger received many awards for his efforts in coaching all of his various teams throughout the years, mainly showcasing the Freeport Pretzels Girls Softball which went downstate. His highest achievement was being inducted into the Illinois Softball Coaches Hall of Fame in 2004. In addition, Denny himself was a successful athlete in high school, college and beyond. He was known as a competitor and a great role model. Daily running was a significant activity of his life; despite bad weather or injuries he hit the trails. Denny also worked as an Insurance Agent. Denny was remembered as a person who liked to put ketchup on his ketchup. Coach Holsinger is survived by his son; Adam Holsinger-Kiefer of Cincinnati, Ohio; sister, DeeAnn Mease of Freeport; niece, Renee (Scott) Engelkens and great-nephew dog, Casper; nephew Randy (Erin) Mease; two great-nieces, Josey and Samantha Mease. Also surviving is his special friend Evelyn Felton. Denny is survived by his dogs and one cat Kelly. He was preceded in death by his parents, and brother-in-law, Clarence "Bunky" Mease. Funeral services for Coach Holsinger will be Monday, July 31, 10:30 A.M. at Faith United Methodist Church, Freeport, Rev. John Wesley Lee, pastor, will officiate. Visitation will be Sunday from 2:00-4:00 P.M. at Burke-Tubbs Funeral Home, Freeport. Burial will be in Cedarville Cemetery. In Lieu of flowers, a memorial has been established in his name. Please visit and sign Denny's guestbook at www.burketubbs.com

Dennis C. "Slinger" Holsinger, 71, of Cedarville, died Sunday, July 23, 2017 at Liberty Village, Freeport. He was born May 15, 1946 in Freeport the son of Charles Keith and Dorothy (Schneider) Holsinger. Dennis was a 1964 graduate of Freeport... View Obituary & Service Information

The family of Dennis C. "Slinger" Holsinger created this Life Tributes page to make it easy to share your memories.

Send flowers to the Holsinger family.