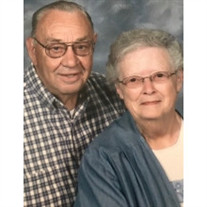 Don Wagner was a life-long Freeport resident, exploring many career avenues in successfully fulfilling his passion and quest of being a provider for his family. His career aspirations began as a draftsman at Hoefer's, transitioning into an entrepreneurial Standard gas station business, partnering with Bob Moore. His next foray was working as a Service Manager at Zimmerman Chevrolet. Subsequently he transitioned into the roles that would carry him through to retirement. He began a 20 year career as firefighter where he embraced specific roles of cook and master mechanic. He definitely was multi-talented! During his firefighting career he also embarked into the HVAC arena, working for Toelle Heating, Boettner and owning Don Wagner Heating. Don served his country honorably in the United States Air Force from December 1951 to February 1956 which included a yearlong tour in South Korea during the Korean conflict. He loved the outdoors spending time fishing and hunting. He spent innumerable hours positively impacting youth as a Scoutmaster where many boys were mentored by his guiding hand over several years. Don was also an avid sports participant and fan, infusing a Chicago Cubs loyalty into the family. Great joy and relief was felt by the family in witnessing the miracle 2016 World Series unfold. He was born January 16, 1932 to Leonard and Florence (Beck) Wagner in Freeport, IL. On June 29, 2019 he passed away from a broken heart, after losing the love of his life, Lois, in December 2018. They were united in marriage on June 6, 1953, and enjoyed 65 years of marriage, which was a gift treasured by the family. He and Lois were very proud of their entire family and delighted in sharing in the success of their four children, 13 grandchildren and 4 great-grandchildren. Don was preceded in death by his beloved wife, Lois (Heilman) Wagner, parents Leonard and Florence, father and mother in law Daniel and Amy (Geise) Heilman, sister Geraldine Hamm, brother in law Robert Heilman, brother in law Robert Lower, sister in law Betty Banderet, brother in law Joffre Banderet and sister in law Carol Wagner. Don is lovingly survived by sons Jeff (Sally) of Freeport, Mark (Anne) of Winona, MN, Roger (Deanne) of Yorktown, VA and daughter Janet (Dan) Breed of St. John, IN. He is also survived by brother Bill of Freeport, sister in law Donna (Robert) Dwyer of Bagley, WI, brother in law Richard Hamm of Freeport and sister in law Marilyn (Bud) Ruthe of Freeport. A celebration of Don's life is scheduled for Saturday, July 27 at 11:00am, with visitation an hour before the service. Services are entrusted to Burke-Tubbs Funeral Homes. In honor of Don's passion for sports the family invites attendees to dress in their favorite sports team apparel, with special favor given to the Cubs and Bears. (Packer wearing attendees will be seated in the parking lot.) The family would like to thank Dr. Bennett for the excellent care he and his staff provided as well as neighbors Frank and Sue Luy for their watchful care of our parents over the years. In lieu of flowers the family requests memorials be directed toward the All Veterans Memorial Park of Stephenson County. Please share a memory of Don at the Burke-Tubbs website as the family reflects upon a dedicated, loyal and hard-working life.

Don Wagner was a life-long Freeport resident, exploring many career avenues in successfully fulfilling his passion and quest of being a provider for his family. His career aspirations began as a draftsman at Hoefer's, transitioning into an entrepreneurial... View Obituary & Service Information

The family of Donald Wagner created this Life Tributes page to make it easy to share your memories.

Don Wagner was a life-long Freeport resident, exploring many...

Send flowers to the Wagner family.