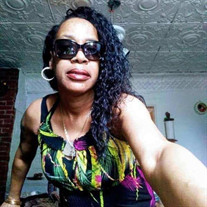 Ermine Jean Triplett Johnson 63, of Indianapolis, Ind. formerly of Freeport, passed away on April 17, 2022, at her home surrounded by her sons and family after a brief illness. She is the daughter of Lamar and Emma (Love)Triplett. Ermine came to know Christ at an early age. She attended Freeport Grammar School at Taylor Park in Freeport, Ill. She went to Freeport Jr. High. She then went to Aquin Catholic High School. She later persuaded a dream in becoming a licensed hairstylist at Rockford Beauty School in Rockford, Ill. She later, began doing Security Work, she was hired at Rock River Water Reclamation Company in Rockford working that job for more than 20 years. She did security work up until her illness. She loved everyone especially her sons and grandchildren she had enough love to go around that’s for sure. Ermine was a “True Warrior” until the end. She married Trevor Jackson of Chicago, Ill. To this union was born a son Travis Triplett where she moved to Colorado Springs to pursue a life with Trevor. She later returned to Freeport for short period and moved to Rockford in 1996. She also married Lander Johnson of Rockford, Ill. in 2012. Special friends: Mama Ida Turner, Gina Pruitt both of Freeport. Lee Reynolds and Charles Lambert both of Rockford, Ill. A special cousin Dorothy J. Chatman of Freeport, and host of nieces and nephews, aunts and cousins She leaves precious memories to be cherished for her 4 sons, Travis Triplett of Rockford, Ill., Joshua (Stephanie)Triplett of Wisconsin Dells, Wisc., Darryl (Anita)Triplett of Indianapolis, Ind., Leslie (Vicky)Thomas Jr. Of Rockford, Ill., one stepson Phil Reynolds of Indianapolis, Ind., Mother evangelist Emma Triplett Cain of Anderson, Ind., stepfather Deacon John Cain of Anderson Ind., one brother Edward L. Triplett of Freeport, Ill., two sisters Bertha M. Triplett, Naomi J. Triplett both of Freeport. One stepsister Shirley A. Cain of Minnesota, 4 stepbrothers John W. Cain, Calvin R. Cain, and Gary Cain of Minnesota, and Elder Charles (Jerry)Jones of Michigan City, Ind., 18 grandchildren, 4 great grandchildren, one Aunt Lanelle Patrick of Las Vegas, NV., one stepbrother Steve Cole of Rockford, Ill., one god sister Georgina Haynes of Freeport. \ Preceding her in death are her father Lamar, Grandmothers Bertha Love, and Emma Triplett. Grandfathers Issaac Love and John Triplett, sister Scherry Triplett, 9 uncles Davell Love, John Ree, Monroe, Issac Jr., Percy, Hosea Triplett, Paul, Parish, Lewis, and 4 aunts Virginia Williams, Eula, Fluffy, Rosa Lee. Ermine had a big and giving heart and will be greatly missed by every heart she touched. Funeral services will be 11:00 A.M. Saturday April 30, 2022 at Evangelistic Church of God in Christ, Freeport, IL. Visitation will be from 9:30 a.m. until the time of service at the church. Burial will be in Freeport City Cemetery. A memorial fund has been established in her name

Ermine Jean Triplett Johnson 63, of Indianapolis, Ind. formerly of Freeport, passed away on April 17, 2022, at her home surrounded by her sons and family after a brief illness. She is the daughter of Lamar and Emma (Love)Triplett. Ermine came... View Obituary & Service Information

The family of Ermine J. Johnson created this Life Tributes page to make it easy to share your memories.

Send flowers to the Johnson family.