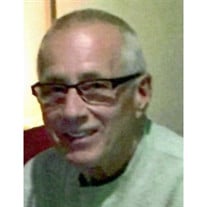 Gary H. Cuplin, 78, of Freeport, died Thursday November 19, 2020 at Manor Court, after a courageous battle with Parkinson's Disease. Gary was born October 10, 1942 in Freeport, the son of Karl P. and Ruth B. (Kryder) Cuplin. He was a 1960 graduate of Freeport High School. Gary married Patricia DeGroff January 16, 1965 in Freeport. Gary worked for Chrysler for 37 and a half years before retiring in 2001. He was a member of United Auto Workers Local 1268 and Freeport Eagles Club. He enjoyed following NASCAR, Highland Community College Basketball, and the Chicago Bears. Gary loved the window visits from family and loved ones for the past eight months at Manor Court. The letters and cards he received over that time cheered him up remarkably. Surviving are his wife, Patricia Cuplin of Freeport; daughter, Sherri Cuplin of Chicago; sister, Karleen (Erv) Olson of Freeport; three brothers, Craig (Anita Marsh) Cuplin, Mark (Lynne) Cuplin and Steven (Kris) Cuplin all of Freeport; also surviving are aunt, Joyce Kryder; special cousin, LuAnn Kryder; sister-in-laws, Judy Wise, Sandy (Don) Christen, and Cindy (neil) Klinger; and many nieces and nephews. Gary was preceded in death by his parents, brother, Robert; in-laws, Harry, and Theora DeGroff; sister-in-laws, Sally Cuplin and Diane Halzel; and brother-in-law, Lester Wise. Mr. Cuplin was also preceded in death by Kenny Metz and Marty Cuplin-Rios. The Cuplin family would like to send a special thank you to FHN Hospice, in particular Alison and Haley for the great care they showed Gary. Gary was blessed to have Haley in his life. The Cuplin family would also like to extend the staff at Manor Court a heartfelt thank you for the wonderful care they showed Gary in these trying times. Cremations rites have been accorded and a celebration of life will be held in 2021 due to COVID. Burial of remains will take place in Chapel Hill Memorial Gardens. A memorial has been established in Gary's memory. Please sign his guestbook and share a remembrance at www.burketubbs.com

Gary H. Cuplin, 78, of Freeport, died Thursday November 19, 2020 at Manor Court, after a courageous battle with Parkinson's Disease. Gary was born October 10, 1942 in Freeport, the son of Karl P. and Ruth B. (Kryder) Cuplin. He was a 1960 graduate... View Obituary & Service Information

The family of Gary H. Cuplin created this Life Tributes page to make it easy to share your memories.

Send flowers to the Cuplin family.