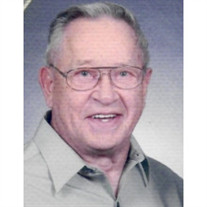 Gene E. Reed, 88, of Cedarville, IL, died Wednesday December 9, 2020 at FHN Memorial Hospital. He was born on December 19, 1931 near Afolkey, IL, the son of Donald and Ruth (Rote) Reed. Gene married Mary Kaiser December 19, 1953 in Cedarville, IL; she died October 21, 2016. Gene went to Cedarville and First ward grade schools, and graduated from Freeport in 1949. He lived 77 of his 88 years in Cedarville. He worked at his father's Service Station (Reed's) from 1949-1951. He then served four years in the Air Force. He returned in 1956 to work for his father. He purchased Reed's on January 1, 1967 and worked until August of 2016. Gene played fastpitch softball from 1948 until he pitched his last game in 2010. He helped form the Freeport Night Owls Softball team in 1967, and played with them through the 1981 season. He played for many other teams including Messing & Becker, Lena, and Cedarville. He also coached the Cedarville Grade School Basketball Team for 14 years. He was a volunteer fireman for 25 years and belonged to the American Legion. Gene is survived by his son, John Reed of Cedarville, IL; sister-in-law, Norma Bawinkel of German Valley, IL; brother-in-law and sister-in-law, Bob and Mary Kaiser of Flower Mound, TX; seven nephews; and five nieces. He was preceded in death by his parents; his wife Mary in 2016; and his daughter Kathleen Reed in 1993. Funeral services will be 11:00 A.M. Monday December 14, 2020 at Burke-Tubbs Funeral Home, Freeport, IL, with Rev. Gavin Brandt officiating. A walk through vistation will be from 10:00 A.M. until the time of service. Face masks and social distantcing will be required. Burial will be in Cedarville Cemetery. A memorial has been established in Gene's memory.

The family of Gene E. Reed created this Life Tributes page to make it easy to share your memories.

Send flowers to the Reed family.