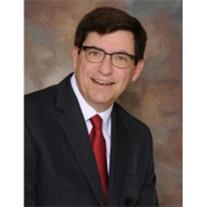 George R. McCarty, 68, of Freeport, died Sunday January 24, 2021 at FHN Memorial Hospital in Freeport. He was born April 2, 1952 in Freeport, IL, the son of Howard and Ethel (Van Matre) McCarty. George married SueAnn Schneider July 28, 1973 at Martintown Community Church. He was a graduate of Freeport High School and Highland Community College. George served his country from 1971-1975 as a member of the U.S. Air Force. As a Boom Operator for the 305th Air Refueling Squadron, he was involved in missions over Vietnam. He worked at Eagles Supermarket for over 25 years, Pick 'n Save, and then at Center School in the Facilities and Grounds department. He was a long-time member of Martintown Community Church where he had served at one time on the board as president. In addition, he was a member of the VFW and the American Legion. He served on the Board of Education for Freeport School District 145 from 2017 until present. In September of 2020, he was named School Board President. George was passionate and dedicated to the success of every child achieving a well-rounded education. In honor of Veterans Day, he would talk to the fourth grade class at Center School about his experiences in the U.S. Air Force. His family was the most important part of his life, especially spending time with his two grandsons Rhyder and Rhayden. George is survived by his wife, SueAnn McCarty of Freeport, IL; two daughters, Candace (Brett) Monson of Marengo, IL and Andria (Rhett) Cornelius of German Valley, IL; brother, Daylon (Margaret) Reed Jr., of Arizona; grandchildren Rhyder and Rhayden Cornelius; mother-in-law, Ilene Schneider of Lena, IL; sister-in-law, Cheryl Schneider, nieces Suzanne Walters and Angie Cunningham and families, of Arizona. George was preceded in death by his parents; father-in-law, LaVerne Schneider; and his stepdad, Charles Dodson. Funeral services will be Monday February 1, 2021 at noon at Martintown Community Church in Martintown, WI with Pastor Kevin Cernek officiating. There will be three different options to view the service: in person at the church, from your car (in the church parking lot on a large screen), or by live streaming on the church's Facebook page. A walk through visitation will be Sunday January 31, 2021 from 1:00-4:00 P.M. at Burke-Tubbs Funeral Home in Freeport. There will be an additional visitation starting at 11:00 A.M. until the time of service Monday at the church. Interment will be at Chapel Hill Memorial Gardens. A memorial has been established in his memory. The family asks that due to Covid, please wear a mask and respect social distancing.

The family of George R. McCarty created this Life Tributes page to make it easy to share your memories.

Send flowers to the McCarty family.