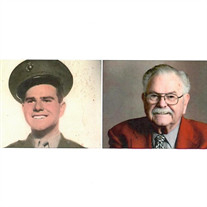 Henry E. Boettner of Freeport passed away peacefully in his sleep on July 28, 2021. He was born on August 24, 1925 in Woodbine, the son of Henry E. and Amanda R. (Hartwig) Boettner. He was educated in rural schools of Woodbine and Sunnyside through 8th grade and graduated from Stockton High School in 1943. He joined the United States Marine Corps, taking basic training in San Diego, then joined the First Marine Division serving in the Pacific Ocean theater and China during World War II. He was honorably discharged as a Corporal in April 1946 and returned to Freeport. He married Gladys Christensen on October 31, 1947; she preceded him in death on June 24, 2005. He was self-employed, operating Boettner Heating and Air Conditioning for many years. He was a member of the Freeport Church of the Brethren. When his sons were young, he was a Cub Scout leader. A member of the Freeport Post 139 American Legion, he served as commander of the Stephenson County Council of the American Legion, commander of the 13th District and chaplain of the 13th District. He was also a member of the Moseley-Lowe VFW Post 998 and the 40/8 Voiture 189. He was instrumental in setting up the Allied Vet transportation van to Madison and served as a volunteer driver. He spent many hours volunteering and helping others. He also enjoyed spending time watching his grandchildren’s sporting and music events. He is survived by son David Boettner of Freeport, two daughters Nancy Boettner of Indianapolis, IN and Wendy Boettner of Freeport, grandchildren, Nathan, Crystal, Charity, Robyn, Jessekah, Christopher, Stepheny, Joel, Seth, Sarah, Simona, Abbigail, and Elizabeth, fourteen great-grandchildren with one on the way, and many other beloved relatives and friends. In addition to his wife, he was preceded in death by his parents, son Steven, daughter-in-law Jeanette, sister Alberta, brothers Leverne and Haldor, granddaughter Faith, and great-grandson Noah. Services will be held at 11:00 A.M. Friday August 6, 2021 at Burke-Tubbs Funeral Home. Visitation will be from 10:00 A.M. until the time of service. There will also be a visitation from 4:00-7:00 P.M. Thursday August 5, 2021 also at Burke-Tubbs Funeral Home. Burial will be at Chapel Hill Memorial Gardens. A memorial fund has been established in Henry’s name.

Henry E. Boettner of Freeport passed away peacefully in his sleep on July 28, 2021. He was born on August 24, 1925 in Woodbine, the son of Henry E. and Amanda R. (Hartwig) Boettner. He was educated in rural schools of Woodbine and Sunnyside... View Obituary & Service Information

The family of Henry E. Boettner created this Life Tributes page to make it easy to share your memories.

Henry E. Boettner of Freeport passed away peacefully in his sleep...

Send flowers to the Boettner family.