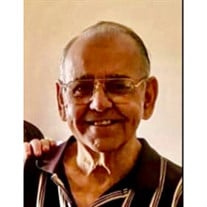 Henry Joseph Dammann, 81, of Freeport went home to celebrate with the Lord on Sunday, April 5, 2020. On a bright sunny spring day, he passed peacefully in his home with his beloved family at his side, and Johnny Cash singing 'I Walk The Line' on the country music channel. Henry was born July 26th, 1938 in Freeport to Carl and Harriet (Jacobs) Dammann. He and his family were lifelong members of Bethany U.C.C. On September 17th, 1960 Hank married the love of his life, Carol Grossenbacher of Dakota. They were inseparable and would have celebrated their 60th Wedding Anniversary this year. With railroad tracks running through the backyard of his childhood home, Hank became a rail fan at a very young age. Engineers came to know this young man standing by the tracks. On occasion, they would let Hank climb up into the engine, and let him ride the train back to the roundhouse. It came as no surprise that Hank went to work for Illinois Central, his dream job. He loved riding the rails. He and Carol would often take day trips into Chicago on Illinois Central's Land O'Corn passenger train. They loved being in the city, whether it was the Chicago Auto Show, shopping in The Loop, or simply lunch at Union Station. On almost every summer weekend, Hank & Carol could be found boating on their beloved Lake Waubesa in Madison. They loved being on the water together - waterskiing, fishing and sunset cruises on the lake. The good life. On September 15th, 1964, as Hank and his buddy Delbert were getting ready to head to Milwaukee for a double header baseball game, Carol went into labor and their daughter Laurie was born. Hank always called her his greatest blessing - even though she interrupted his game day plans! Soon after having their child, Hank left the railroad to be home more often. He began his career as a metallurgist at Micro Switch, Plant 1 across the river. Later his office moved over to Plant 2 downtown, and he eventually retired from Honeywell. In their later years, Carol would pack lunches and they would head to Rochelle Rail Park for the day. Dad would video trains and chat with other rail fans, while Mom would sit near the car and work on her crocheting. Hank's dream as a young man was to visit Cheyenne, Wyoming and watch Union Pacific's Big Boy Steam trains climb up Sherman Hill, hauling freight to Laramie, Wyoming. By the time he had the means to travel west, steam locomotives had been replaced by diesel engines. Union Pacific re-acquired Big Boy 4014 from a museum and restored the locomotive. In 2019 Hank's daughter Laurie took him to Clinton IA to 'chase' the Big Boy. Hank was able to watch the engine slowly chug into the station and stop. After Big Boy left the station, they hopped in the car and quickly drove to the Low Moor, IA crossing where Hank was able to watch Big Boy steam by at full speed. With a big grin on his face, he claimed that his lifelong dream had now been fulfilled. Hank is survived by his loving wife Carol, of Freeport; daughter Laurie (Dennis) Ruthe, of Freeport: granddaughter Jennifer (Reid) Mazanek, of Las Vegas, Nevada; grandson Jordan Ruthe, of Sterling, VA; his lifelong best friend, Delbert Carley, of Freeport; and his beloved longtime friend, Doctor Michael Merry. Hank was the last living soul of his immediate family, predeceased by his parents; his sisters Elsie and Charlene; his brothers Willis and Carl. The family wishes to thank Dr. Michael Merry for his loving care and compassion throughout all the years; his staff, including Laurie's 'back door' girls, Dena & Lori who were always ready to help; FHN Hospice staff, especially our angels Brenda & Amy; and Peak Medical Home Care, for helping fulfill Dad's wishes to be at home for his final days. Due to the current state of the union, private family services will be held. Burial will be in Dakota Cemetery. A memorial has been established in his memory. Please sign Henry's guestbook and share a remembrance at www.burketubbs.com

Henry Joseph Dammann, 81, of Freeport went home to celebrate with the Lord on Sunday, April 5, 2020. On a bright sunny spring day, he passed peacefully in his home with his beloved family at his side, and Johnny Cash singing 'I Walk The Line'... View Obituary & Service Information

The family of Henry Joseph Dammann created this Life Tributes page to make it easy to share your memories.

Send flowers to the Dammann family.