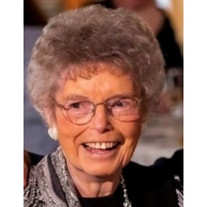 Isabell Jackson Campbell Harbach, age 90, died on October 21, 2019 at home. Isabell was born September 24, 1929 in Rockford, IL to James and Jean (Mitchell) Campbell. She attended Rockford schools and graduated in 1947 from West High School. She was in West High Chorus and Madrigal Singers and Second Congregational Church Choir where she also taught Sunday school. She worked in Truesdale Ice Cream and Candy Store, Weise Department Store and First Bank. Isabell married Gerald A. Harbach on October 9, 1948 at Second Congregational Church in Rockford by Dr. Joseph Cleveland. They moved to Freeport and Isabell worked at SS Kresge Co. Store until moving to the family farm in 1950. Isabell and Gerald went into the business of farming and growing Harbach's Meats with Gerald's parents, Karl and Velma. She taught Sunday school and was an active member of the Freeport Church of Christ. She was one of the first PTA Presidents for Douglas Elementary School and a member and officer of the Junior Women's Guild. She was active with the Beef Association and volunteered at the annual Stephenson Co. Ag Breakfast from its start in 1985 until 2016. Isabell was always working to provide for her family and care for others in need. She was constantly working to prepare meals for others at every opportunity whether it was daily lunch on the farm, a potluck at church, a funeral meal or working at the food bank. Surviving are her husband of 71 years, Gerald of Freeport; daughter Sally (Bob) Fleming of Naperville, IL and three sons Bruce (Karen) Harbach of Freeport, Bradley (Susan) of Shannon, IL and Mitchell (Won) of Florida; and one brother James Campbell of Rockford, IL. Also surviving are 15 grandchildren, 19 great grandchildren and many nieces and nephews. She is preceeded in death by one newborn son, Eric and by her parents and sister, Jean Marriett. The visitation will be from 3-7pm Friday October 25, 2019 at Burke-Tubbs Funeral Home, 504 N. Walnut, Freeport, IL. The funeral will be Saturday October 26, 2019, 1pm at the Freeport Church of Christ, 1635 S. Carroll Ave, Freeport, IL with burial at the Eleroy Cemetery following. In lieu of flowers, donations may be made to Shult-Lewis Child & Family Services, Shriners Children's Hospital, St. Jude's Children's Hospital or Freeport Church of Christ.

The family of Isabell J. Harbach created this Life Tributes page to make it easy to share your memories.

Send flowers to the Harbach family.