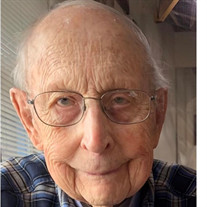 Jack William Sward, born September 11, 1926, went home to be with the Lord on Sunday, March 27, 2022. Jack was 95 years old. Surviving are his devoted wife of 42 years, Karola; one daughter, Monica (Frank) Percic of Minnesota; one step-son, Karl (Marci) Shields; Six grandchildren, John Shields, James Shields, Henry Percic, Elizabeth Shields, Frederick Percic, and Sarah Shields; one niece, Patricia Meyers of Freeport; nephews Steve Guth, and David (Debbie) Meyers, both of Freeport, and Dean Sward of Georgia. Jack was born to Nels “Fred” and Lillian (Ahrens) Sward, and was the youngest of seven children, all of whom preceded him in death: Virginia (Guth) Williams, Lucille Meyers, Fred (Bud) Sward, Betty Sward, Patricia Breska, and Frank Sward. A lifelong member of Grace Episcopal Church, Jack was baptized in 1931, and was known in his youth as “Apple Jack.” Considered to be a bit shy, Jack loved building and flying model airplanes and seeing movies with his brother, Bud. Jack and his siblings hunted and fished with their father, often fishing in the family’s homemade wooden boat on the Pecatonica River with their canine companions: Prince, Togo, Suzie, Timber #1, Timber #2, Mississippi, and Timber #3. The family grew their own fruits and vegetables, which were shared with those less fortunate. A 1944 graduate of Freeport Senior High School, Jack played trombone all four years in the FHS marching band. After graduation, Jack served in the United States Army Air Force during World War 2, completing basic training in TX, attending technical school at Chanute Field in Rantoul, IL, ultimately becoming a weather specialist. Jack was promoted to Corporal at Scott Field, near O’Fallon, IL and served at Tinker Field by Oklahoma City, OK, and was honorably discharged from Mitchel Field, near Long Island, NY in 1946. He enjoyed seeing USO shows and listening to radio programs, including everything from Bob Hope to The Shadow. After the War, Jack proudly served as a Letter Carrier, then Supervisor of Delivering and Collecting, and retired as a Postmaster, serving the United States Postal Service for almost 38 years. Jack brought his model airplane hobby into adulthood, owning and operating a Piper Cherokee plane with a friend. He enjoyed local flights and would take disadvantaged youth on aerial tours of the area. His nephew Buddy was so inspired that he became a professional pilot and captain of American Airlines. Jack loved to travel - - be it by car, rail, ship or airplane - - he explored Europe and North America in the golden age of sea and air travel and could tell you the type of airplane from the sound of the engines. When Jack was in his fifties, he met his wife, Karola, and they married in January 1980. Jack and Karola enjoyed traveling together, particularly around Europe, where they cultivated a network of friends and family who welcomed them. There were family vacations to Norway, Denmark, Germany, Switzerland, Austria, Portugal and The Netherlands, as well as domestic trips to Florida, Yellowstone, San Francisco, Washington, D.C., and Chicago. In addition to travel, Jack and Karola enjoyed fishing together on the Mississippi, hunting for wild asparagus, playing cards and games, visiting with friends and family, taking drives in the country, and listening to big band, polka and German music. Jack loved listening to a good marching band, whether live in a parade or on TV. Jack was an avid woodworker and had fine woodworking tools and machinery. Jack would salvage ornamental pieces from historic homes around Freeport slated to be demolished and reimagine those into cupboards, desks, newel posts and even a dumbwaiter in his home. After Monica went to college, Jack started his third career as the friendliest Enterprise Rent-A-Car driver in Freeport. He frequently took trips back and forth to Rockford but also around the Midwest, bringing a smile with him wherever he went. Jack loved being a Grandpa to his six grandkids and enjoyed visiting with all of them. He was an enthusiastic supporter of their musical, athletic, and scholastic exploits. When he was able, he would attend baseball games and band performances, and later would watch them live-streamed or recorded, always cheering them on. His Minnesotan grandsons called him Grandpa Jack and lovingly recall playing trains on the floor, card games and texting with him, also Facetiming with him and Oma. Jack had a perpetually sunny spirit, a kind word, and a vice-like handshake that made strangers friends and always made you feel as if you were special. And you were special: now you were a friend of Jack’s. Cremation rites will be accorded, and Jack’s remains will be interred in the Columbarium at Grace Episcopal Church in Freeport. Visitation at Grace Episcopal Church will begin at 12 noon Saturday, 2 April 2022 with the memorial service immediately following at 1:00 pm. Elevator services and handicap accessible ramps are available at the church. A memorial has been established in Jack's memory.

Jack William Sward, born September 11, 1926, went home to be with the Lord on Sunday, March 27, 2022. Jack was 95 years old. Surviving are his devoted wife of 42 years, Karola; one daughter, Monica (Frank) Percic of Minnesota; one step-son,... View Obituary & Service Information

The family of Jack W. Sward created this Life Tributes page to make it easy to share your memories.

Send flowers to the Sward family.