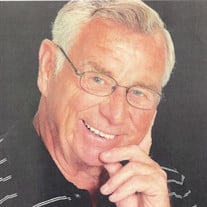 James “Jim” R. Redington, 81, of Freeport passed away peacefully in his home Sunday January 9, 2022 surrounded by his loving family. He was born January 16, 1940 on the family farm in Apple River, IL, the second of five children to Carl and Gladys (Skaggs) Redington. Jim attended Hanover schools, and enlisted in the United States Air Force in 1958. As a Fuel Supply Specialist he spent a year in Iceland and three years in Germany. On July 24, 1965 he married Judy Weimerskirk at St. Joseph's Catholic Church in Bellevue, IA. His career included several years as a welder at Stover Steel in Freeport before becoming a Journeyman Sheet Metal Worker with Union Local #219 in Rockford. In 2018 Jim was honored to receive his 50 year membership pin. Jim was also a member of St. Mary’s Catholic Church and a lifetime member of the VFW. Anyone who knew Jim would attest to his strong character, his belief in what was right and just, his determination, and his fight! He loved supporting all his grandchildren's activities and was immensely proud of each of them. “Grandpa Jim” could always be found in the bleachers at wrestling meets, soccer and football games. He was his grandkids biggest fan. Jim is survived by his wife of 56 years Judy; four children Rhonda Redington-Oscar, Randy (Lisa) Redington, Renee (Troy) Barr and Rita (Shain) Gallagher; siblings Jerry Redington, Ron (Sandy) Redington; Mary Kay (Bob) Weimerskirk; eight grandchildren Tess and Raina Oscar, Jessica and Jacob Redington, Joseph and Caleb (Chloe) Janssen, Blake and Grant (Taylor) Gallagher; two great grandchildren Tony and Carmen with a third on the way; brother-in-laws Matt (Deb) Weimerskirk and Tom (Ang) Weimerskirk; sister-in-law Pam (Terry) Tomlinson; and numerous nieces and nephews. Preceding Jim in death are his parents Carl and Gladys; sister Ruth Brininger; brother-in-laws Larry Weimerskirk, Donald Weimerskirk, and Louie Brininger; sister-in-laws Doris Redington and Ruth Weimerskirk and mother and fathers-in-law Bob and Myrtle Weimerskirk. Funeral mass will be on Friday January 14th at 10:30 am at Sacred Heart Chapel - St. Vincent Church in Freeport with masks required. Father Robert Camacho will officiate. A visitation will be held from 4 to 7pm on Thursday January 13th at Burke-Tubbs Funeral Home in Freeport with a scripture service starting at 4. The family would like to extend a special thank you to FHN Hospice. A memorial has been established in Jim’s memory.

The family of James "Jim" R. Redington created this Life Tributes page to make it easy to share your memories.

Send flowers to the Redington family.