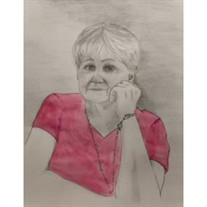 Jean Elizabeth Kisner lived thirty minutes into the morning of March 26th, 2020. She passed while her firstborn daughter held vigil, reading Jean texts and messages from those who expressed their love and wished her more. Jean had fought recurring cancers for two years, and while she never gave up her struggle to continue living and retain her powers of thought and movement, the final two weeks were precipitous and swift. Jean Griffin was born two years after World War II on Sept 3rd, 1947 in Evergreen Park, Illinois, at Little Company of Mary Hospital, to Lawrence and Beverly Griffin. The eldest of three sisters, Sandra and Judy, Jean and the Griffin family lived initially in a western neighborhood of Chicago, and then settled in Romeoville in 1958, when the Hampton Park subdivision was first opening up. The family informally adopted an extra sister in the early 70s and the four sisters: Jean, Sandy, Mary and Judy, became the backbone of an extended family that was based in Illinois and Minnesota. Jean met John Guiles Kisner from Beltrami county Minnesota at Hudec's Resort in Waskish, Minnesota. Their love story was honest, true, joyful, and strong. They were married in the First Presbyterian Church of Romeoville on April 3, 1970 with Marie Hudec, who would be her best friend for fifty years, acting as maid of honor. Jean and John established their family in Kelliher, Minnesota where she had three children: Bethany Marie Kisner in 1971, Griffin Guiles Kisner in 1973, and Beverly Margaret Kisner in 1976. Seeking economic opportunity, she and John relocated back to the Chicago suburbs, moving to Bolingbrook in 1979, and then back to Romeoville in 1983. In her early adult years, she worked as baker, prep cook, and operating manager of many restaurants and bakeries. She was a talented cake decorator and baker. Jean was a gifted and experienced cook on the level few become and all appreciate. When her children were sufficiently grown to make their own sandwiches and had enough sense to stay away from water moccasins, Jean decided to go back to school in 1987 and finish her college education. In 1991, she completed her undergraduate degree and graduated from Benedictine University, graduating magna cum laude with a major in Special Education and a minor in Psychology. She later earned an MA in Education at Lewis University in 1997. She earned many special certifications, including Supervisor of Special-Ed, Supervisor of Special-Ed.-Learning Disabilities, Supervisor of Special-Ed.-Mentally Handicapped, Standard Secondary Teaching, and Supervisor of Special-Ed.-Social/Emotional Disorders. Jean became a special education teacher, special education coordinator, and later an elementary school principal. In these roles she became an advocate for compassion and understanding in education, particularly for those children with learning differences and social-emotional disorders. Jean enjoyed ceramics and later crafting in general. She was knowledgeable in several areas, including European history and especially fascinated by the life of English queens. Jean and her sisters became locally infamous in many parts of Minnesota, Michigan, and Illinois for their loving antics. The four sisters loved traveling and vacationing together and in the late nineties became known collectively as the "Smelly Cats." They spent every opportunity they could to travel together, laugh with each other, and enjoy each other's company. Jean is survived by two of her sisters, her three children, her husband John, and seven grandchildren. She is also survived by a wider circle of family that is difficult to explain or define, but which will miss her every bit as much as if she were related by direct blood. Beyond that, there is an even wider circle of colleagues and students who will remember her fondly and always appreciate the drive she had for her career passions. Jean will most be remembered for the type of person she was, and the way she treated those around her with considered respect. Her philosophy as a parent was the same as her philosophy as an educator and a principal; she strove to truly assess and understand each of her children on their own terms, sought to give each of them individually what they needed to grow and succeed, and asked from each of them what she thought would be the best for them to give. She believed in honesty, open communication, emotional support, and the giving and receiving of love unconditional: love unattached to personal benefit, use, or gain; the sort of love that remains steadfast and constant even as it changes; the sort of love that is of countless times and places but which retains an eternal hue that permeates the lives off all those she knew. Bethany, Griffin, and Beverly all had friends in their childhood who grew up and said essentially the same thing: "It was growing up watching your family, and particularly your Mom, that I truly understood what a family could be-- what a family should be." Jean was many moms and many sisters to many people. A matriarch for 40 years who shouldered her role with both humor and gravitas. Her absence is a wound which her family will strive to close by doing what she would have done: standing close and holding on to one another until the very last moment. We will miss her fiercely, even as we will endeavour to carry her legacy forward. No services are planned at this time. Please sign Jean's guestbook and share a memory at www.burketubbs.com

Jean Elizabeth Kisner lived thirty minutes into the morning of March 26th, 2020. She passed while her firstborn daughter held vigil, reading Jean texts and messages from those who expressed their love and wished her more. Jean had fought recurring... View Obituary & Service Information

The family of Jean Elizabeth Kisner created this Life Tributes page to make it easy to share your memories.

Jean Elizabeth Kisner lived thirty minutes into the morning of...

Send flowers to the Kisner family.