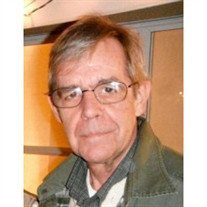 Jeffrey B. Mikkelsen, 73, of Freeport, IL passed away at home on May 17, 2018 after a year-long illness. He was born in Chicago on July 11, 1944, to Nels O. and Dorothy S. Mikkelsen. He married Kathleen Boggs in 1965 at Grace United Methodist Church in Lake Bluff, Illinois. Jeff graduated from Lane Tech High School in Chicago in 1962 and later received a degree in English and History from Northern Illinois University. Jeff became a teacher and enjoyed sharing his passions for literature and history with his students. He taught English and Social Studies at Pearl City High School for 14 years and at Freeport High School for 3 years. A native of Chicago, Jeff grew to love his adopted city of Freeport. It gave him the opportunity to participate in local government, and he served his community in many roles. He served as Director of NW Illinois Chapter of the Red Cross, Director of the Freeport Area Chamber of Commerce, and Director of Community Development for the city of Freeport. He was proud that during his tenure with the city he was instrumental in establishing the city's first ever recycling program. Jeff also served on various community boards. He was an alderman on the City Council for 15 years and later served an extended period as a member of the Stephenson County Board, where his competence and voice of reason proved valuable. Jeff was a life-long learner, an avid reader of both fiction and nonfiction. He was a huge fan of William Shakespeare and attended live performances of his plays whenever he could. A favored subject of his personal study was the U.S. Constitution, its history and implications. He was a Civil War enthusiast, a student of military and political history of both World Wars, and a self-described political junky. Jeff loved to travel and many times accompanied his wife as she escorted her French students to France and other European destinations. Jeff was preceded in death by his parents, his brother Scott A. Mikkelsen of Arlington Heights, and his son Brian L. Mikkelsen of Madison, WI. He is survived by his wife Kathleen, son Todd Mikkelsen, sisters Lisa Roettger of Freeport and Carol Mikkelsen of Seattle, WA, special family friend Jennifer Sandor, and many beloved in-laws, nieces, nephews, and dear friends. Jeff's intelligence, wit, wealth of knowledge, penchant for fun, and loving nature will be greatly missed. Cremation rites have been accorded. The family wishes to thank the nurses and doctors at Leonard Ferguson Cancer Center and the nurses from Able Home Health for their kind and competent caregiving in Jeff's final days. A Memorial Service will take place at 12:00 noon on June 7 at Burke Tubbs Funeral Home. The Rev. Timothy A. Boggs of St. Alban's Episcopal Church, Cape Elizabeth, ME, will officiate. Visitation will be at 10 a.m. until time of service. A memorial has been established in his memory, to be donated to Leonard Ferguson Cancer Center. Messages may be left for the family at www.burketubbs.com.

Jeffrey B. Mikkelsen, 73, of Freeport, IL passed away at home on May 17, 2018 after a year-long illness. He was born in Chicago on July 11, 1944, to Nels O. and Dorothy S. Mikkelsen. He married Kathleen Boggs in 1965 at Grace United Methodist... View Obituary & Service Information

The family of Jeffrey B. Mikkelsen created this Life Tributes page to make it easy to share your memories.

Jeffrey B. Mikkelsen, 73, of Freeport, IL passed away at home...

Send flowers to the Mikkelsen family.