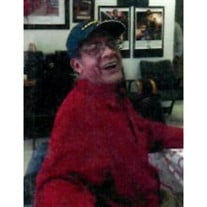 Joseph George Marion Fly, 94, passed away on December 16, 2020 at his home in Arlington, TX surrounded by his family.He was born January 20th, 1926 in Danville, Illinois to William Marion Fly and Dasey Frances(Smith) Fly. He was the youngest of five children. In 1944, he enlisted with the United States Navy, where he completed his high school education. He served in the Pacific theater during World War II. During his service, he was awarded the American Area Ribbon, the Asiatic Pacific Area Ribbon and the World War II Victory Ribbon. He received his training at the Great Lakes Naval Station. After his service, he returned to his hometown and married Cora Nelson. To this union one son was born. He relocated to Freeport, IL. Upon the the ending of his first marriage, he met and married Gertrude Williams, who was originally from St. Louis, MO. He also gained from this union two step sons. To this union two daughters were born. After working for Honeywell and Chrysler Motors, he retired in 1988 from Gunite Industries in Rockford, IL after 17 years of service. This was an early retirement. A self- made man, he taught himself small engine repair, construction, masonary , electrical wiring and welding. In 1967 he built an entire addition to his home including a garage with electrical wiring and phone service. Joseph "George" loved fishing, boating, hunting, RV camping, gardening and travel. He enjoyed taking his family coast to coast and seeing the great wonders of the United States every summer. While he still resided in Freeport, IL he was an active member of the Philippians Baptist Church, until he relocated to Arlington, TX to be with his daughters in 2013. He immediately joined Mount Olive Baptist Church, where he was a known and dedicated member, and the oldest member of the church for the last 5 years of his life. His membership was recognized and made possible through dedicated van transportation and ushers that where available to assist in his attending service every week. Throughout his extended nearly 95 years of life he was known for knowledge about family and history. He shared stories of living in an ara that was challenging to people of color and nearly lost his life as a young boy in Kentucky, vowing never to return. Joseph George "SuperFly", was known for his catchphrases and quick wit sense of humor, and his encouragement and support of seeing others accomplish great things in life. His love of life and family, will be greatly missed. His most used phrase, "That aint no lie", will stay with family and friends for years to come. In addition to his parents, he was predeceased by his wife, Gertrude Fly I 1995, his sisters, Willeen Fly Grundy, Edwina Street and Dorcas Geraldean (Jerry) Jones. One brother, Edmund Fly and one step- son Aaron Herron Jr. Surviving him are two sons, William (Billy) Watson of Atlanta, GA, born in Josephs early adult life, Darrell Glen Fly of Dallas, TX and one step- son, Ricardo Herron Sr., of Ironton, MO. Two daughters, Marion P. Fly of Ft Worth, TX and Laurie W. Fly of Arlington, TX. His legacy of grandchildren include Mikal A. Fly, Samuel Shaw, Ricardo Herron Jr., and Janiece Herron and several great grandchildren and great-great nieces and nephews. Also ,he leaves behind two nieces Minister Shanae Dowell and Minister Sally Shannon. A service of remembrance will be held at Chapel Hill Memorial Gardens in Freeport, IL where interment will also be on December 26, 2020. Honorary Pallbearers; Mikal Fly, Christopher Ward,Samuel Shaw, Ricardo Herron Jr., Gary Edison and Floyd Dawson Jr. Family Acknowledgments, Thank you to all for your words of kindness, thoughts and prayers and any acts of love shown to the family during this time of loss. A special thank to Angela, Lauren and Revere Court Memory Care for each role in extending his time with us.

Joseph George Marion Fly, 94, passed away on December 16, 2020 at his home in Arlington, TX surrounded by his family.He was born January 20th, 1926 in Danville, Illinois to William Marion Fly and Dasey Frances(Smith) Fly. He was the youngest... View Obituary & Service Information

The family of Joseph George Marion Fly created this Life Tributes page to make it easy to share your memories.

Send flowers to the Fly family.