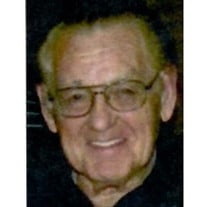 Kenneth B. DeVine, 86, of Freeport, passed away at home, on Sunday, October 18, surrounded by his loving family. He was born in Salvisa, Kentucky on June 4, 1934, to the late Ralph Sr and Berniece DeVine. Kenneth was a 1952 graduate from Belvidere High School and was the MVP for football his senior year. He was also a veteran of the US Navy. He married Jennie (Stroud) DeVine on September 7, 1954 in Poplar Grove, IL. He was a retired road trucker for over 44 years. He was an avid fan of the Packers, University of Kentucky, and the White Sox. Kenneth is survived by his loving wife of 64 years, Jennie, of Freeport, daughter Debra of Freeport, and Lisa of Clay City, KY. Grandchildren; Megan (Joe Stenta) Genandt, of Freeport, Austin (Kristina) Genandt, of Forreston, and Amanda DeVine of Clay CIty, KY. One great granddaughter Adalynn Genandt of Forreston. One brother Donald (Elaine) DeVine of Lowell, IN. Three nieces and one nephew. Special daughters Chris Camerer, Reggie Grove, and numerous friends. Also his fur babies Raji and Buddy. Kenneth was preceded in death by his parents, his brother Ralph Jr., his son Michael, and two grandsons; Shaun DeVine and Kenneth Genandt. The family would like to thank FHN Hospice, and many thanks to Jeannie Almasy. Also thanks to Reggie Grove, Deena Chavez, and Renee Braderich. Funeral Services will be 2:00 p.m. on Saturday October 24, 2020. Elvert Williams will officiate. The visitation will be from 12:00 p.m. until the time of service. In honor of his love for sports, please wear your favorite sports attire. There will be a memorial set up in Kenneth's memory. Burial will be in Chapel Hill Memorial Gardens. Please sign his guestbook and share a remembrance at www.burketubbs.com

Kenneth B. DeVine, 86, of Freeport, passed away at home, on Sunday, October 18, surrounded by his loving family. He was born in Salvisa, Kentucky on June 4, 1934, to the late Ralph Sr and Berniece DeVine. Kenneth was a 1952 graduate from Belvidere... View Obituary & Service Information

The family of Kenneth B. DeVine created this Life Tributes page to make it easy to share your memories.

Send flowers to the DeVine family.