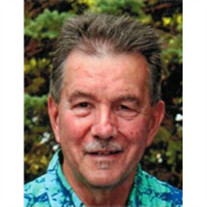 Lance Leland Barney, 78, of Freeport IL died peacefully April 15, 2019 in his home surrounded by loved ones after a long battle with Parkinson's disease. He is survived by his wife of 54 years, Judy (Johnson) Barney; his sons Kirk Barney (Patricia) of Edwardsville, IL, Matthew Barney (Katie) of McFarland WI, and Joshua Barney (Erin) of Evanston, IL; his siblings, Barbara Schoenwetter, Cissy Barney, Hunter Barney, and Becky Franks; six grandchildren, Leland, Will, Benjamin, Jasper, Elliot, and Jane; and many friends. Lance is preceded in death by his parents and brother, Marshall Barney. Born in Elkhorn WI and raised in Burlington WI, the son of Leland and Ruth (Bruhn) Barney, he lived in Freeport 42 years. Lance attended the University of Wisconsin Madison, graduating with a bachelor's degree in Economics. He met his wife, Judy Johnson, at the University and they were married in 1964 in Chicago. In 1963, he began service in Army Intelligence in Columbus, GA. After serving with the Army, Lance worked in sales for AT&T in Chicago and Cincinnati OH. In 1977, he moved to Freeport to partner with his brother, Hunter Barney to establish Gilt Edge Farms and build what became a large Agri-Business for 30 years employing over 20 people annually. He not only took pride in his business, but he contributed to the community in many ways including serving as a board member of the Norman Sleezer Youth Home in Freeport for over 20 years. He loved the land and owned a piece of property outside of Freeport he named 'Woodchuck' that he actively tended and planted 4 acres in prairie grasses. There were many enjoyable walks and casual gatherings with friends and family. Traveling the world was a life long passion. Lance and Judy traveled throughout the United States, the Caribbean, Mexico, China, South America sailing around Cape Horn and across Europe. He especially enjoyed the annual family trips with sons, wives and grandchildren. A constant jokester, Lance loved to laugh, make others laugh and play practical jokes. He did this with his 1946 antique fire engine, using it for weddings and parades, or bringing groups to Union Dairy for ice cream. He also brought joy through his vivid tropical shirts. Services will be Friday April 26th, at St John United Church of Christ, 1010 S. Park Blvd. Freeport with visitation beginning at 9:30 a.m. and funeral at 11:00 a.m. Reverend Hank Fairman will preside. Memorials go to Norman Sleezer Youth Home and Friends Forever Humane Society both of Freeport. Cremation rites have been accorded. Burial at Grandview Cemetery at a later date. Please sign Lance's guestbook and share a memory at www.burketubbs.com

Lance Leland Barney, 78, of Freeport IL died peacefully April 15, 2019 in his home surrounded by loved ones after a long battle with Parkinson's disease. He is survived by his wife of 54 years, Judy (Johnson) Barney; his sons Kirk Barney... View Obituary & Service Information

The family of Lance L. Barney created this Life Tributes page to make it easy to share your memories.

Send flowers to the Barney family.