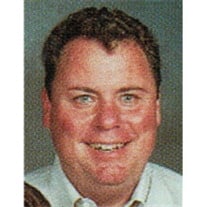 Larry McIntyre, 56, of Freeport, IL passed away suddenly on September 25, 2019. He was born on March 21, 1963 in Freeport, IL to Joseph and Priscilla (Lenz) McIntyre. He graduated from Aquin High School in 1981. In 1983, he graduated from Highland Community College where he later served as a Student Board Trustee. In 1985, he received his BA Degree in Business from UW-Platteville. On November 17, 2001 he married Kathleen Bormann. Larry, along with Curt and Linda McIntyre, started Quality Transport of Freeport, where he continued to serve as Vice-President. Larry was a devoted Catholic member of St. Thomas Aquinas Catholic Church. He served on the board of the Freeport Salvation Army as Marketing Chairman and Advisory Board member. Larry was generous in giving his time, talent, and support of family, friends and to his community. Larry was very dedicated to the Aquin Family showing his support of his children Madelyn and Mason's various school activities. His most memorable times were spent with his family and friends. He loved taking pictures, cooking, and boating. Most important, were his love and devotion to his kids. Larry is survived by his wife, Kathleen McIntyre; daughter, Madelyn (17); son, Mason (15); sisters, Kathy (Roger) Grenoble of Freeport and twin sister, Lauri (John) Dougherty of Breese, Illinois; brothers, Curt (Linda) McIntyre of Freeport and Mike (Peggy) McIntyre of Stockbridge, Georgia; also surviving are numerous nieces and nephews. He was preceded in death by his parents Joseph and Priscilla McIntyre; brother, Gary McIntyre; step-father, Donald Scott; and mother-in-law, Terrie Bormann. Funeral Mass will be 10:30 a.m. Monday September 30, 2019 at St. Thomas Aquinas Catholic Church. Fr. Kenneth Anderson will officiate. Visitation will be Sunday, September 29, 2019 from 1:00 p.m. - 4:00 p.m. at Burke Tubbs Funeral Home with a scripture service starting at 12:30. There will also be a visitation Monday at St. Thomas from 9:30 a.m. until the time of service. In lieu of flowers memorials have been established for Aquin Catholic Schools and the Freeport Salvation Army in Larry's memory. Please sign his guestbook and share a story at www.burketubbs.com

Larry McIntyre, 56, of Freeport, IL passed away suddenly on September 25, 2019. He was born on March 21, 1963 in Freeport, IL to Joseph and Priscilla (Lenz) McIntyre. He graduated from Aquin High School in 1981. In 1983, he graduated from Highland... View Obituary & Service Information

The family of Lawrence "Larry" J. McIntyre created this Life Tributes page to make it easy to share your memories.

Larry McIntyre, 56, of Freeport, IL passed away suddenly on September...

Send flowers to the McIntyre family.