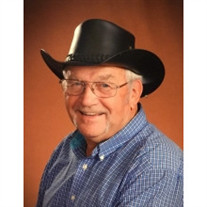 Loran W. Wilken, 78, of Leaf River died Saturday, October 5, 2019. He was born April 7, 1941 to Walter and Letha (Garman) Wilken. On February 20, 1982, he married Kathy Akins in Forreston, IL. Loran was a graduate of Forreston High School and later served in the United States Navy as a catapult captain. After completing his service, he worked construction and started farming. For several years he worked as a mechanic in different shops. Loran also worked as a claims adjuster for Forreston Mutual and Town and Country Mutual in Pecatonica. He also owned his own construction business, gas station, and car dealership. Most recently he was co owner of Fibbers Bar and Grill in Leaf River, IL with his wife. Known by his nickname Doolittle he enjoyed karaoke, tractor pulls and playing jokes on those he knew and didn't know. Throughout his life he served on the Leaf River School Board, was a church deacon, a Forreston FFA Alumni, a State FFA Alumni Board member, and Maryland Township. Loran is survived by his beloved wife Kathy (Akins) of Adeline; his loving children Terry (Vicky) of Oregon, Troy (Molly) of Leaf River, Amy of Freeport, and Andrew (Janet) of Anacortes, WA; loving grandchildren Stacy of Texas, Danielle of Pecatonica, Brandon (Melissa Bokker) of Rockton, Randi (Garrett) Kohlbauer of Freeport, Jordan of Oregon, Sienna and Zander of Anacortes, WA; loving great grandchildren Isabelle, Lexi, and Levi; dear sister Lorene (Gary) Stamm of Freeport, brother Leland of Freeport; caring mother-in-law Alice Akins of Forreston. He is preceded in death by his parents, his brother, Laverne, and two infant brothers. A visitation will be from 3:00 p.m. until 8:00 p.m. on Tuesday, October 8, 2019 at Burke-Tubbs Funeral Home in Forreston. An additional visitation will be from 10:00 a.m. until 11:00 a.m. on Wednesday, October 9, 2019 at Faith Lutheran Church in Forreston with funeral services to begin at 11:00 a.m. Burial to follow services at White Oak Cemetery in Forreston. Please sign Mr. Wilken's guestbook and share a memory at www.burketubbs.com

The family of Loran W. Wilken created this Life Tributes page to make it easy to share your memories.

Send flowers to the Wilken family.