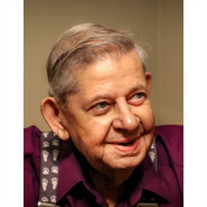 Lynn K. Kurtz, 83, a lifelong resident of Freeport, IL. passed away Wednesday, September 16, 2020 at Meriter Hospital in Madison, WI. He was born August 26, 1937 in Freeport, IL to Charles and Vera (Dawson) Kurtz. On October 18, 1975, he married Betty Hull in Freeport, Il. Lynn was the youngest child of the family, and he was doted on by his parents and older siblings. When he was eight years old, his future mechanical inclination emerged. Legend has it, he took apart a clock, and when his mother told him he needed to get it back in working order to avoid being punished, he quickly re-assembled it. He avoided "the switch," and many decades later that clock ticked away. At age 14, he built a car and drove it to an uncle's garage in downtown Freeport. Unfortunately, the local law enforcement made him get it back home, as it did not have lights or plates, and Lynn did not have a license. All of his mechanical endeavors, fortunately, panned out, as Lynn worked his entire career as a skilled mechanic, ultimately owning his own business, "The Trans Shop," for more than 30 years. He loved anything with an engine, and raced go carts and souped-up cars in his younger years. However, motorcycles were his real love, with one or more parked in his garage his entire adult life. He belonged to three chapters of The Gold Wing Riders Association: Freeport Chapter C2, Rockford Chapter L, and Rock Falls Chapter G. Lynn loved traveling the country on his motorcycle with his wife behind him, and they visited nearly every state. He also enjoyed dancing, bowling, eating out (and flirting with the waitresses), and playing card and board games with his wife, his children, and his grandchildren. He was a crafty gamesman, although he was most happy when he was winning. He was an eclectic collector, focusing at different times on items such as flashlights, tools, and electric bicycles. He was a Green Bay Packers fan, much to the chagrin of his Chicago Bears-loving family members. Although Lynn was never particularly loquacious, one way to get him talking was to bring up cars, motorcycles, or his youthful adventures-and there were many!! Lynn loved making others laugh, he lived life to the absolute fullest, and he loved fiercely. He was very proud of his children, grandchildren, and most recently, his great-granddaughter, Harper. His absence will be felt deeply by his entire family. Surviving are his wife Betty of Freeport, IL; three sons, Jeff Kurtz of Eau Claire, WI, Tim Kurtz of Rockford, IL, and Brad (Ann Wool) Kurtz of Dakota, IL; three daughters, Cindy Kurtz of Freeport, IL, Wendy (Kurt) McGath of Freeport, IL, and Holly (Shawn) Orr of Moorpark, CA; eleven grandchildren, Ryan McGath, Kyle McGath, Matthew (Blair) McGath, Taylor (Adam Watry) McGath, Tatum Orr, Maddox Orr, Jaryk Kurtz, Kamryn Kurtz, Kylie Vautsmeier, Kaitlyn Karstedt, and Bradyn Becker; and one great-grandchild, Harper McGath. Lynn was preceded in death by his parents, his brother, Richard Kurtz, and two sisters, Shirley Lundgren and Marilyn Grimes. Private family services will be held. Cremation rites have been accorded. A memorial has been established in Lynn's memory.

The family of Lynn K. Kurtz created this Life Tributes page to make it easy to share your memories.

Send flowers to the Kurtz family.