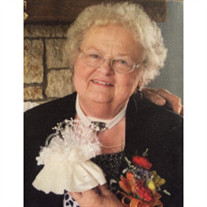 Patricia P. Wells, 78, of Freeport, died Wednesday, January 10, 2018 at FHN Memorial Hospital. Pat was born June 12, 1939 in Lockport, Illinois, the daughter of Bernard J. and Lorraine (Sisson) Ward. She was a 1957 graduate of Lockport High School, 1959 graduate of Joliet Junior College and a 1961 graduate of University of Illinois. She began her teaching career in 1962 at Freeport Junior High School where she met her future husband; Chauncey "Bud" Wells Jr. Pat married Chauncey on August 29, 1964 in Lockport. Mrs. Wells teaching career continued until the first of their three children were born. She continued as a substitute teacher for many years. She was a member of St. Joseph Catholic Church where she was a member of the Marian Society, Freeport Garden Club, Past President of the Jr. Woman's Guild of the Y.W.C.A., and was a board member of the Y.W.C.A. Pat was an active crafter in the area and attended many shows for over 48 years. She owned and operated Crafts by Pat. She also enjoyed spending summers at the family cabin on Lauderdale Lakes near Elkhorn, WI. Surviving are her husband, Chauncey "Bud" Wells Jr. of Freeport; three sons, David (Kay) Wells of Champaign, Douglas (Christina) Wells of Lombard, and M.D. Michael (Sheila) Wells of Galena; brother, Bernard "Ted" (Judy Drafz) Ward of Glen Ellyn; sister, Jacqueline (Richard) Acuff of Corpus Christi, Texas; and her two other siblings. Also surviving are her eight grandchildren, Kameron, Noah, Trey, Kelsey, Ryan, Owen, Ayden, and Quinlan. Pat was preceded in death by her parents. Funeral Mass will be 10:30 a.m. Monday January 15, 2018 at St. Joseph Catholic Church. Fr. Kenneth Anderson will officiate. Visitation will be 1:00 p.m. - 3:00 p.m. Sunday January 14, 2018 at Burke Tubbs Funeral Home. There will also be a visitation from 9:30 a.m. until the time of service Monday at St. Joseph's. Burial will be in Calvary Cemetery. A memorial has been established for St. Joseph Catholic Church in Pat's memory. Please sign Mrs. Wells guestbook and share a remembrance at www.burketubbs.com

The family of Patricia P. Wells created this Life Tributes page to make it easy to share your memories.

Send flowers to the Wells family.