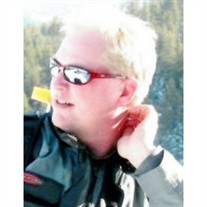 Philip Mark Grandstrand, 49, of Freeport set down his tools for the last time & left his earthly duties on Feb. 17, 2020. The outpouring of support has been so beyond what we could have ever expected and such a testament to our son, brother & friend. Phil was the first born of 3 boys. He was brought into this world Sept. 7, 1970 to parents, Mark Grandstrand & Cheryl (Thomas) Grandstrand at the time. He was born at St. Joseph's Hospital in St. Paul, MN. His mother shared that she named him Philip because it meant strength & she knew he would grow up to be a strong, hardworking man, which he did. He loved growing up on the family farm in Shafer, MN & was very close to his grandparents, Clifford & Ruth Grandstrand. One of Phil's final resting places will be with them at Chisago Lakes Hillside Cemetery in Center City, MN. Upon moving to Illinois at the age of 16, he attended & graduated from Orangeville High School. Philip played sports & participated in school plays. We are grateful he was able to recently celebrate his 30-year class reunion with his close friends. The pictures from that evening express the bond he shared with his classmates. Following high school, he attended Universal Technical Institute for diesel mechanics. He also completed his certification for HVAC. After that, Phil dabbled in anything & everything & was a master at them all. Whether it was HVAC, vehicle repairs, excavating or helping a stranger in need, Phil was a superior tradesman & human being. At the time of his passing he was currently working for En-Trac in Rockford, IL as a laborer. Phil will be remembered for so many things & for always being there for others. His laugh & smile seem to resonate the most with those he was dear to. Another Grandstrand trait is to collect "stuff" - toy tractors, tools, vehicles, hats & more. For Phil, we always cracked jokes about his & his brother Jon's flashlight collections. Phil always assisted Jon in justifying his purchases by claiming they "were a good deal". Jon wants to carry on his legacy with the saying "live by junk, die by junk". Phil also enjoyed his travels with friends - especially snowmobiling out West, which will be another resting place for Phil. We find comfort in knowing he spent his last days with his closest friends, who were more like family to him. He enjoyed dinner with Michelle & Bret Myers & spent his last night at the Schlueter Family Farms. One thing we will always find humor in is Phil thought paradise was on some land in Mississippi & he always said if he could have Blake Shelton put on a concert for his friends & family someday, that's when he would know he made it big. We hope that is what heaven is like for you, Philip. Phil was proceeded in death by his Grandma & Grandpa Grandstrand & Grandpa Charles Thomas Sr. Those surviving Phil & keeping his memory alive include his father & step-mother, Mark & Cheryll Grandstrand, of Wisconsin Rapids, WI, his mother & her significant other, Cheryl Arnold & Jon Cloutier, of Hastings, MN, his grandmother, Joyce (Thomas) & Herb Johnson of Troy City, OH, his brother, Peter Grandstrand, of McConnell, IL, another brother, Jonathan (Joleen) Grandstrand & 2 nephew dogs, Koal & Kai, of Freeport, IL, step-sister, Michelle Mollner, of Madison, WI, step-brother, Tony Mollner & nephew, Drake, of Lodi, WI along with Phil's 3 cats, JJ, Roxy & Patches, & several aunts, uncles & cousins & so many close friends that we can't begin to name them all. We ask that you help us honor our Phil by attending a visitation at Burke Tubbs Funeral Home on Friday, Feb. 28, 2020 from 3 to 6 PM. A celebration of life will be hosted with the help of his great friends, Doug Hastings & Katie Stager, at Rt. 20 Bar & Grill the following day, Feb. 29, 2020 from 2 to 5 PM in the East banquet room. Cremation rites have been accorded. In lieu of flowers, you are welcome to make a memorial donation in Phil's memory. We wish to extend a sincere thanks to everyone who cared for Phil over the last 49 years...he was one of a kind. Please sign Philip's guestbook and share a remembrance at www.burketubbs.com

Philip Mark Grandstrand, 49, of Freeport set down his tools for the last time & left his earthly duties on Feb. 17, 2020. The outpouring of support has been so beyond what we could have ever expected and such a testament to our son, brother... View Obituary & Service Information

The family of Philip M. Grandstrand created this Life Tributes page to make it easy to share your memories.

Philip Mark Grandstrand, 49, of Freeport set down his tools for...

Send flowers to the Grandstrand family.